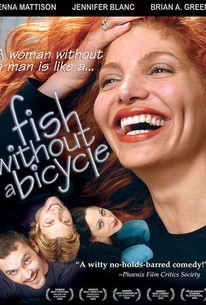 Fish Without a Bicycle Photos

A newly single woman confronts the perils of both dating and life in California in this independent comedy drama. Jules (Jenna Mattison) is an aspiring actress who has grown disenchanted with her handsome but remote boyfriend, Danny (Brad Rowe). Jules decides to break up with him and lands a role in a play in Los Angeles, where she has to fight off the none-too-subtle advances of her director, Michael (Bryan Callen). As rehearsals go on, Jules finds herself developing an infatuation with her co-star Ben (Brian Austin Green), but she isn't certain if she's ready for a new commitment so soon, which leads her into the strange world of dating in Hollywood. As she tries to sort out her future and her love life, Jules often confides in her close friend Vicki (Jennifer Blanc), a lesbian who carries just a bit of a torch for Jules, and she gets some solid if unexpected advice from middle-aged Greta (Edie McClurg). Jenna Mattison wrote the screenplay for Fish Without a Bicycle as well as playing the leading role, while Brian Austin Green did double duty by playing Jules' co-star and love interest while also directing the picture.

Critic Reviews for Fish Without a Bicycle

Although not exactly original in its aspirations or execution, the film's engaging performances and occasional funny moments lift it a notch above the pack of similarly themed fare.

Feels like an acting exercise stretched to feature length.

Brian Austin Green makes his directorial debut with this uneven romantic comedy about a self-absorbed, twentysomething actress searching for Mr. Right -- and a purpose in life.

Never rises above the level of a second-rate TV sit-com.

Strong performances are marred by a script whose dialogue ranges from cheesy to unspeakably bad.

In this misguided romantic comedy, an actress (Jenna Mattison) is turning 25 and having a long-before-midlife crisis.

The script is truly schizophrenic, either painfully naïve or pointedly shocking.

Clunker of a 20-something dramedy.

Not only does it take a solid thirty to forty minutes before the audience grows to like any of the characters or even care about Jules's situations, but one ends up more interested in the lives of Danny, Michael, and Ben.

Audience Reviews for Fish Without a Bicycle

There are no featured audience reviews yet. Click the link below to see what others say about Fish Without a Bicycle!

Fish Without a Bicycle Quotes