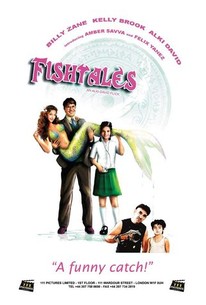 A widowed Greek-History professor on the verge of losing his research grant befriends a beautiful mermaid on the run from a malevolent fisherman in this fantasy comedy starring Kelly Brook and Billy Zane. Professor Thomas Bradley is on the verge of a major academic breakthrough in the area of ancient love spells, though his days researching enchantments seem numbered when it appears that his grant may soon go away. Thankfully, Professor Bradley has a good friend in the form of Professor Coulter, an Oxford don who invites Bradley to his home on a Greek island to continue his research for the time being. Eager to carry on with his research, Professor Bradley rounds up his twelve year old daughter Serena and sets his sights on Greece. Upon crossing paths with an ethereal mermaid named Nereid, the professor believes he has finally found the inspiration he needs to complete his thesis. But before Professor Bradley can finish his work he must help protect Nereid from the conniving Captain Navros, who won't stop hunting the mermaid until he has managed to claim her priceless, jewel-encrusted tail for himself. ~ Jason Buchanan, Rovi

It comes so close to the edge of charm and sweetness and whimsical, frothy fun, only to repeatedly pull back, stymied by clumsy pacing and bad jokes.

A really badly written script, in an appaling film that gets one star because of the beatiful island of Spetses and the divine to watch Kelly Brook.