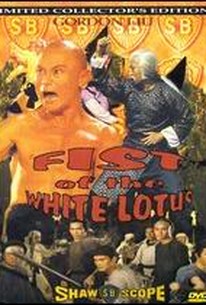 As a sequel to Executioners from Shaolin, this standard kung-fu actioner features Liu Jiahui as the fighter Hong Wending whose friends have been killed by the seditious White Lotus Society. He wants revenge. In order to prepare himself for the great confrontation with the head of the White Lotus fighters, White Eyebrow--otherwise known as Pai Mei--who has two remarkable skills: He can achieve weightlessness and he can draw his reproductive organs up into his stomach in order to protect them. Wending is trained by a woman (Hui Yinghong) in how to use her more flexible style of combat. From his boss, he also learns the secret of acupuncture points that are connected with specific parts of the body. Armed with needles placed in his braided hair, he is ready to shut down his opponent like a toy whose batteries are disabled. His opponent, it so happens, is an aged abbot (played by director Lo Lieh) who looks like he could not harm a fly. ~ Eleanor Mannikka, Rovi

Lo Lieh greatness + rad techniques + Kara Hui = Yes sir. It's martial arts flick 101, but done right. Lo Lieh is one of the best movie villians ever, this is a fact.