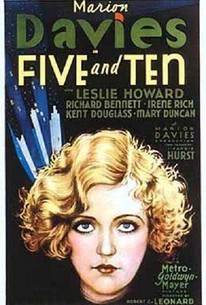 Based on a story by Fannie Hurst, Five and Ten stars Marion Davies as Jennifer, the spoiled daughter of department-store magnate John Rarick (Richard Bennett). Because Rarick neglects his family, they all manage to get themselves into hot water. Jennifer's mother, Jenny (Irene Rich), nearly runs off with a gigolo, while her alcoholic brother, Avery (Kent Douglass), nearly dies in a reckless aviation escapade. As for our heroine, she messes up her entrée into high society, but at least finds happiness in the arms of architect Berry (Leslie Howard). Rarick finally awakens to his family responsibilities, and in a last-reel flurry of activity, he pulls all their coals out of the fire. Five and Ten was released in Great Britain as Daughter of Luxury. ~ Hal Erickson, Rovi

Ruth Selwyn
as Midge
View All

Critic Reviews for Five and Ten

There are no critic reviews yet for Five and Ten. Keep checking Rotten Tomatoes for updates!

There are no featured reviews for Five and Ten at this time.