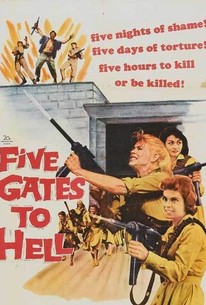 The celebrated author of 1975's Shogun, James Clavell, directs (and produced and wrote) this effective, if low-budget World War II drama. The story takes place in French Indochina (later Vietnam) where a group of two Red Cross doctors and seven nurses are captured by a guerrilla band and taken to the side of a grievously ill warlord. The realities of war and its effects on everyone are brought forward as the doctors are eventually killed, and the nurses use sex as a means of escaping their captors. Brutal scenes of the stabbing of a patient under surgery and the symbolic murder of a nun are qualified by the even-handed portrayal of the damage war does to the human side of human nature. ~ Eleanor Mannikka, Rovi

There are no critic reviews yet for Five Gates to Hell. Keep checking Rotten Tomatoes for updates!

There are no featured reviews for Five Gates to Hell at this time.