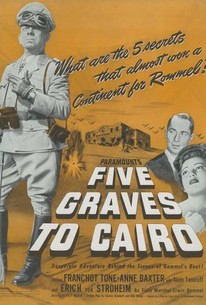 Billy Wilder's Five Graves to Cairo is the third take on Lajos Biro's theatrical tale of romance and espionage, +Hotel Imperial. This time, the action is transplanted from World War I Galicia to World War II Egypt as Rommel's Afrika Corps viciously forces the British Army to retreat towards Cairo. Protagonist John J. Bramble (Franchot Tone) is stranded in the Sahara, the lone survivor of a British tank crew. In shock and suffering from sunstroke, Corporal Bramble deliriously staggers across the desert searching for the nearest outpost. What he finds is the Empress of Britain Hotel in the Libyan border town of Sidi Halfaya. The city has been deserted and destroyed; no one remains but the Inn's owner, Farid (Akim Tamiroff), and the French chambermaid, Mouche (Anne Baxter). To the woman's chagrin, Farid conceals the English soldier as the Germans commandeer his hotel for the lodging of General Rommel (Erich Von Stroheim). Mouche is unsympathetic toward the plight of any Englishman. She feels the British had abandoned the French Army at Dunkirk, where one of her brothers was killed and another was captured. She has remained in Sidi Halfaya only to wait for the German Army and to bargain for her sibling's freedom, not to help the British. Despite Mouche's protests, Bramble assumes the identity of the hotel's deceased waiter, Davoss, who was crushed during an air raid. Surprisingly, the disguise affords him an immediate audience with Rommel. Davoss was, in fact, a top-secret Nazi spy. This access to Rommel, the invincible Desert Fox, inspires Bramble to remain at the Empress. It becomes his mission to steal the crucial secret of the five supply depots the Germans have buried from Tobruk to Cairo -- which gave them a fighting advantage -- and possibly turn the war in Britain's favor. Meanwhile, after being rejected by the General, Mouche is desperately reduced to "entertaining" Rommel's deceitful lieutenant in order to help her brother. She and Bramble inevitably grow closer as they each struggle to save what is dear to them. When the body of the real Davoss starts to emerge from the rubble in the Empress' basement, it becomes Mouche's fate to make the ultimate decision between saving one brother and saving many.

It has a little something for all tastes, provided you don't give a darn.

An early and often overlooked effort from writer-director Billy Wilder.

The fast pace and sinewy plot strands ensure a surprisingly brisk, jaunty romp for a film released in the midst of the conflict it depicts.

..sees its protagonist ensnared in a two-fold trap: a literal one and an existential one.

This cleverly orchestrated espionage/war drama (with a patriotic coda befitting its year of production, 1943) is enhanced by subtle touches of humour, all emanating from character, which makes it a triple joy as a classic from Billy Wilder

Wilder's work is known for its bitter cynicism and able balancing of absurdity with dead seriousness, but this film, while enjoyable, shows an uncertainty of tone.

Billy Wilder's Oscar-nominated espionage thriller, a fictitious account of how Rommel was foiled by the Brits, is entertaining in large measure due to Erich von Stroheim's performance

Literally in the middle of the Sahara Desert a small but desperate drama unfolds during the early days of World War 2: the British are being beaten back by the incomparable Desert Fox, Rommel (von Stroheim, in his very element!) and it looks as if they'll lose Africa altogether. A lone British soldier, delirious with heat exhaustion, beaten in battle, wanders right into the very path of the German war machine. What happens next is expertly handled by Wilder in this forgotten wartime tale of suspense and intrigue. The scene with Anne Baxter and von Stroheim alone in his bedroom is nearly worth the price of admission by itself.

fun wartime espionage thriller set in the sahara. franchot tone makes a fine dashing lead, a british soldier stranded in the desert and overtaken by the nazi high command, with anne baxter as his haughty love interest, a french hotel maid desperate to make a deal with them. and how can one go wrong with erich von stroheim as field marshall rommel. akim tamiroff is a wee bit over the top but there's suspense, comedy, romance, really something for everyone. watch the first scene and see if you're not hooked