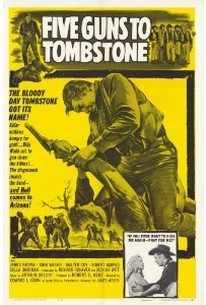 Matt Wade escapes from prison and tries to persuade his brother Bill, a reformed gunslinger, to participate in a hold-up. Billy refuses but Matt frames him and he is forced to ride off with the gang. Billy fights with his brother and accidentally kills him, while Matt's teen-aged son, Ted, who thinks his father had been paroled from prison, sees the shooting. Returning to town to explain the true situation, Billy is almost lynched by the townsmen mob who think he was part of the robbery. He escapes and goes back to the gang, pretending to join them but actually looking for evidence to clear himself and turn gang leader, Ike Garvey, over to Marshal Sam Jennings. Only his fiancée Arlene knows of his plan.

There are no critic reviews yet for Five Guns To Tombstone. Keep checking Rotten Tomatoes for updates!

There are no featured audience reviews yet. Click the link below to see what others say about Five Guns To Tombstone!