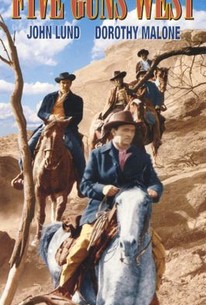 Five convicted outlaws, sentenced to hang, are recruited by a Confederate Army officer on what could easily be a suicide mission -- they're each given a full pardon in exchange for a quick ride through hostile Indian territory to Dawn Springs, Kansas, where their job is to stop a stagecoach coming in from California. The coach is carrying Stephen Jethro, the head of intelligence for the Confederacy in California, who has sold out to the Union, and $30,000 in gold that Jethro was to use for espionage work on behalf of the south -- their job is to bring Jethro in alive if possible, but to stop him from reaching Union territory, and to bring the gold back to the Confederacy. But the temptation of that gold weighs on all of these men -- Hale Clinton (Touch Connors) and Govern Sturgess (John Lund) seem destined to fight it out to the death -- and the presence of Dorothy Malone at the Dawn Springs relief station doesn't help matters. Before it's over, there will be multiple double-crosses, one important partial redemption, and an ever growing list of casualties.

This western from Corman is more of a thriller and that's what I liked about it, but it's not well made and it has its boring scenes.