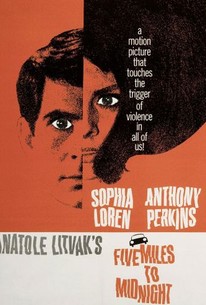 Just a few years after Psycho made him an internationally known actor, Anthony Perkins starred with Sophia Loren in this suspense drama about a mismatched husband and wife, Bob and Lisa. When they first met in Italy, Lisa was an impoverished young woman and Bob was an American GI who looked like he was going somewhere. Now that the couple has settled down in Paris, Lisa has a steady job but Bob cannot seem to last very long in any employment whatsoever. Just as Lisa bids him good-bye at the airport, on his way to yet another job possibility, she lets him know that she is leaving him. Well, the plane crashes and Bob manages to get away intact without anyone knowing it. He shows up back home and convinces Lisa to collect on his life insurance -- and that is when everything starts to go downhill on a bobsled.

Sophia Loren is given very little opportunity to display her acknowledged talent for acting in Anatol Litvak's new film.

[A] chilling story of mismatched mates.

A curious early 60s drama manages to feel detached from an exact time and place, while fans of Loren or Perkins should definitely enjoy this film's offbeat demeanor.

Fans of melodrama will enjoy this juicy item that sometimes seems Hitchcockian in tone but most of the time exists in a world of its own.

The story is not only full of holes; it is also replete with coincidental narrative embellishments stitched on as an afterthought to keep the holes from showing too much.

The tawdry atmospheric "insurance fraud film" crashes along with its plane crash vics.

Solid suspenser with a some surprises along the way.

I was pleasantly surprised by this movie, it stars two of my favourite actors, and the story is really cool. It's dramatic, suspenseful, and exciting, but also funny. I highly recommend it.

Wonderful cinematography and great acting from the beautiful Sophia. And Anthony Perkins was wonderfully eerie just like in Psycho... but a little toned down. This is a hidden gem! :)