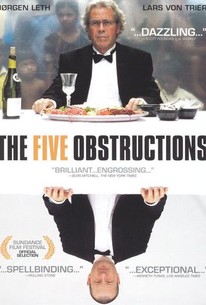 Critics Consensus: Both an intriguing intellectual exercise and an amusing look at the contrasts between the two filmmakers.

Critics Consensus: Both an intriguing intellectual exercise and an amusing look at the contrasts between the two filmmakers.

Critic Consensus: Both an intriguing intellectual exercise and an amusing look at the contrasts between the two filmmakers.

Jacqueline Arenal
as The Perfect Woman

Daniel Hernandez Rodriguez
as The Man

Patrick Bauchau
as The Man, The Perfect Man

Alexandra Vandernoot
as The Woman, The Perfect Woman

Claus Nissen
as The Man, The Perfect Man

Maiken Algren
as The Woman

Burt Christensen
as The Gangster

Marie Dejaer
as The Maid

Meschell Perez
as The Couple

Pascal Perez
as The Couple

Anders Hove
as The Naked Man

Charlotte Sieling
as The Naked Woman

Stina Ekblad
as The Woman With Money
View All

Critic Reviews for The Five Obstructions

Von Trier's antic documentary The Five Obstructions...comically reveals the Dogmatist at his torturous worst while tapping into appealing depths of insecurity he's never allowed himself.

[...]The reason The Five Obstructions lingers as an essential part of von Trier's filmography [...] is because it reveals so much about why von Trier has worked the way he has in the past [...]

It's amusing only if you agree not to think very much about it.

A film like this has a limited audience, I suppose, but for that audience it offers a rare fascination.

As much as it is an examination of filmmaking, it's also a rather brilliant motivation to goad one friend into creative action, for, as we move along through the film, one can assume that Von Trier and Leth both seem to struggle with issues of depression.

Von Trier is rejuvenating his mentor's imagination. He's also reminding him that art can 'catch the conscience' of the audience and the artist.

[Leth's] strength against adversity elevates the movie above the one-sided whipping of a genial man to a more interesting duel of filmmakers. He parries when von Trier thrusts.

This unique work does humanise the two directors, but also shows that these two fallible humans are capable of making wonderful if not perfect cinematic works.

Somehow the humor and purpose of this project escaped me.

Despite his own pessimism, I think Von Trier does change Leth as an artist, a little, through these chastisements.

Audience Reviews for The Five Obstructions

The premise of "The Five Obstructions" suggests a pretentious egghead jerk-off but, surprisingly, this is one of director Lars Von Trier's most watchable films. Perhaps it's because his Danish comrade Jorgen Leth supplies so much of the content. In 1967, Leth directed a 13-minute short titled "The Perfect Human." It's a stark, colorless film where most action occurs within a shapeless, white void. There are just two onscreen actors. A man and a woman, drolly presented as the ultimate examples of our species, simulate various mundane behaviors while deadpan narrator Leth describes their activity. It's a film with a curious, aloof appeal that's difficult to articulate. Decades later, Von Trier tests his friend Leth to remake this short five times while obeying some perverse, arbitrary rules (or "obstructions"). Von Trier's apparent goal is to tear down the protective artifice of filmmaking and force Leth to "expose" himself. The stipulations include having no shot longer than 12 frames, Leth taking the lead role, filming in Cuba, filming in the most miserable location Leth knows (answer: a crowded Mumbai slum) and even making a cartoon (a form that both men openly detest). Von Trier is a notorious character with oft-observed sadistic tendencies and, indeed, there is something unsettling about his manner. His mix of cruel demands, polite demeanor and a tiny, crafty smile recalls Nazi stereotypes (regardless of his recent Hitler-related controversy). But the affectionate rapport between him and Leth is sweet. Also, the resulting five shorts are quite entertaining. "The Five Obstructions" is incredibly self-indulgent, but film nerds will enjoy this gentle battle of wits.

The penultimate film screened in the Lars von Trier course I took, this is a really fascinating, direct look at the obsession with mimicry and the simulacrum present in von Trier's previous work. It is, above all, a look at a supremely insecure auteur putting on a character with which to present his work to an expectant public, and the interface of that character with another director who seems wholly unconcerned with such frivolities. von Trier is as much a performer as the actors in the films he creates; his films cannot be comprehensively critically evaluated without looking at the singular creative force behind them, as auteur theory postulates. Here he turns the camera on himself, playing himself, playing an artist at odds with another artist, and the results are mind-boggling to say the least. We are meant to assume that he sees himself in Jorgen Leth in some capacity, especially as outlined by the final letter that he has Leth read, but more subtly in his attempts to "scar" Leth with the challenges he imposes upon him. Telling is von Trier's frustration when Leth rises to those challenges every single time. I think The Five Obstructions is valuable for how it reduces the concept of the auteur to a mere person, with his own foibles and defects. It doesn't necessarily divorce him from the art he creates; think of this somewhat as reality television for filmmakers, taking a pair of talented individuals and pitting them against each other in a series of challenges. The only catch here is that there is no reward, short of psychological fulfillment or defeat. Ultimately, the game is in von Trier's hands, and the way he plays it should hold considerable fascination for anyone interested in a thorough dissection of the personal process of filmmaking.

I noted the time I stopped watching this: 45 minutes into the film. Holy Hannah, it goes on for another 45 minutes according to the jacket. I've spent a long 45 minutes many times in my life. A few oral surgeries come to mind. And only halfway there. Watching the entire thing would be the equivalent of surviving botched oral surgery, with ensuing complications even. I quote the entire Netflix blurb, the one that suckered idiot me in:

Danish filmmaker Lars von Trier, a leader in the Dogme 95 movement (which eschewed artificial lighting and props and promoted digital video), is legendary for his one-of-a-kind approach to moviemaking and the memorable fruits of his labors. In this collaboration with fellow director Jorgen Leth, von Trier challenges Leth to remake his 1967 movie The Perfect Human and documents the entire process, allowing viewers to see two geniuses at work.

Allowing? Allowing! Oh, mahalo nui loa for the crumbs. Flixster friends, I would call your attention to the word "geniuses." Now I know I'm not a smart man. Perfect proof of this fact is that I often make the stupid assumption that when someone uses a word, say a word like "genius" or "geniuses," that this use of the word somehow matches my own idea of what the word means. In this case, I am disappointed in my clueless assumption yet again. I am not watching my idea of geniuses at work here. What I am watching is two very self-absorbed guys, who aren't geniuses in my universe, playing an irritating game, and that game is boring me to death. If only one of them would pull out a gun and introduce the ultimate obstruction -- killing the other one so the pain/film would end abruptly -- like unexpectedly opening the door so that the string goes taught in surprise and pulls the tooth out instantly, when you least expect it. A move like that would be pure genius in my personal dictionary.

Walter, if you haven't already guessed it, I have another winner for our little list.

Even worse, I'm particularly po'd right this minute because, in wasting time watching this piece of cruft, I just realized I've missed two-thirds of a two-hour documentary on Thelonius Monk. Dare I say, a "genius" in my book. Borat this borating movie.