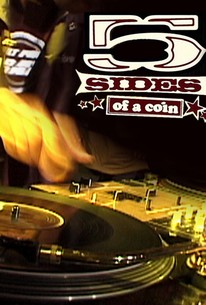 Exploding the myth that Hip-Hop is merely 'rap music,' "5 Sides of a Coin" is an in-depth look at the worldwide phenomenon of Hip-Hop. Today Hip-Hop is a multi-billion dollar industry and a socially relevant culture. "5 Sides of a Coin" features exclusive interviews and footage of Hip-Hops pioneers, insiders, critics and fans, including Afrika Bambaataa, Grandmaster Flash, Jazzy Jay, Gil Scott-Heron, Run DMC, Jurassic 5, De La Soul, Dilated Peoples, Beat Junkies, Q-Bert, Mix Master Mike, The Pharcyde, DJ Spooky, The Stereo MC's and many, many more Hip-Hop artists interviewed around the world. Their voices define the culture in their own words: the good, the bad and the flossy. Embraced by a diverse cross-section of youth, Hip-Hop is a powerful force, one that transcends its commercial trappings and controversies, that stands alone as the number one youth movement in the world. -- © 7th Art Releasing

Critic Reviews for Five Sides of a Coin

If you like the music, you will appreciate Mr. Kell's attention to it, and relish the on-camera presence of legends like Kool Herc and Afrika Bambaataa. But '5 Sides of a Coin' will make your head nod more than it makes your eyes widen or your ears pop.

This survey is a well-meaning Nickelodeon pep rally.

A decent enough intro to the music many of us spend our time avoiding.

Kell doesn't stay on any of these subjects long enough to score more than a tasty, semi-obscure factoid or two from each.

Audience Reviews for Five Sides of a Coin

There are no featured audience reviews yet. Click the link below to see what others say about Five Sides of a Coin!

Five Sides of a Coin Quotes