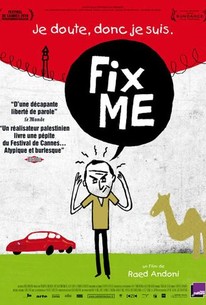 One man sees his physical and emotional maladies as a metaphor for the calamitous history of his homeland in this documentary. Filmmaker Raed Andoni is a Palestinian who has been plagued with migraine headaches and suffers from depression; he's been seeing an analyst in hopes of relieving his pain, but a recurring theme in his discussions with his doctor is the madness that's a part of daily life in Palestine, with violence (both real and threatened), military occupation and harassment a constant part of their lives. Under insane circumstances, how does someone not go mad? In Fix Me, Adoni explores his own troubles as well as those of fellow Palestinians, many of whom have become activists (and have spent years in jail) as they battle for the freedom of their nation while their own lives remain stuck in neutral, a casualty of a life lived during an unending war. Fix Me received its North American premiere at the 2010 Sundance Film Festival.

Critic Reviews for Fix Me

There are no critic reviews yet for Fix Me. Keep checking Rotten Tomatoes for updates!

There are no featured reviews for Fix Me at this time.