Flags of Our Fathers2006 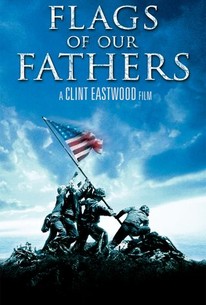 Critics Consensus: Flags of Our Fathers is both a fascinating look at heroism, both earned and manufactured, and a well-filmed salute to the men who fought at the battle of Iwo Jima.

Critics Consensus: Flags of Our Fathers is both a fascinating look at heroism, both earned and manufactured, and a well-filmed salute to the men who fought at the battle of Iwo Jima.

Critic Consensus: Flags of Our Fathers is both a fascinating look at heroism, both earned and manufactured, and a well-filmed salute to the men who fought at the battle of Iwo Jima.

Flags of Our Fathers Videos

Flags of Our Fathers Photos

Clint Eastwood's adaptation of the non-fiction book Flags of Our Fathers concerns the lives of the men in the famous picture of soldiers raising the American flag over Iwo Jima during that historic WWII battle. Battle scenes are intercut with footage of three of the soldiers - played by Ryan Phillipe, Jesse Bradford, and Adam Beach -- who survived the battle going on a goodwill tour of the United States in order to sell war bonds. Many evening they are forced to reenact their famous pose, something each of them finds more and more difficult to do as they suffer from survivor's guilt. Eastwood frames the story by having one of the men's grown son (Tom McCarthy) interview his father's old comrades in order to find out more about what happened to his father. Eastwood followed this film with Letters from Iwo Jima, a second film about the battle of Iwo Jima, but told from the Japanese perspective. Flags of Our Fathers was produced by Eastwood and Steven Spielberg. ~ Perry Seibert, Rovi

V.J. Foster
as Major on Plane

Lennie Loftin
as Justice of the Peace

Jayma Mays
as Nurse in Hawaii

Jim Cantafio
as Reporter in L.A.

Mark Colson
as Reporter in L.A.

Danny McCarthy
as Reporter in Chicago

Patrick New
as Reporter in Chicago

James Horan
as Reporter in NYC

Michael Canavan
as Reporter at Hansen's

Johann Johannson
as Sergeant on Beach

Martin Delaney
as Marine at Cave

Daniel Forcey
as Marine on Beach

Jeremy Merrill
as Marine in Shellhole

News & Interviews for Flags of Our Fathers

View All Flags of Our Fathers News

Critic Reviews for Flags of Our Fathers

The film is confirmation of Paul Haggis's predilection for exploitation and easy sentimentality.

Eastwood's two-film project is one of the most visionary of all efforts to depict the reality and meaning of battle.

A quest to find the humanity behind the imagery of Iwo Jima that never gets beneath the skin to the real men who became heroes with a single camera shot.

Flags of Our Fathers is touched by greatness. It argues that soldiers may go into battle for country and glory but they always end up fighting for the survival of themselves and their comrades.

Here, the feelings run very deep, and dark as dried blood, with Clint aware that some things don't need to be said and others shouldn't be shown.

It's an intelligent and sincere movie, if a little stodgy.

Lacks passion and excitement, the ability to awe and amaze, and ultimately the power to entertain.

Eastwood does manage to provide a hint (and a hint is all that is feasible) of the way war affects an ordinary soldier: the terror, the cruelty, but also the moments of selflessness, even grace.

The corn pone elements begin to stack up -- the swelling strings, the tearful father-son moment, the syrupy voiceover -- and the film starts to resemble an old-fashioned war picture.

Possibly the richest testament Hollywood has yet made about the paroxysm of World War II ... an astounding movie on every level, not the least of which is its common humanity.

Sequences fade into the pack and make it difficult to differentiate one player from the others, much less remember them after the lights go up.

Audience Reviews for Flags of Our Fathers

The men who raised the flag over Mount Suribachi become part of the War Department's propaganda machine and are labeled heroes, much to their chagrin. I have mixed feelings about this film. On the one hand, the concentration on using these soldiers' fame for the war effort is a unique and insightful way of telling this story. And Clint Eastwood's direction is superb, able to film battle sequences with a realism similar to Saving Private Ryan and to linger on disturbing images just long enough. On the other hand, the film attempts to problematize the concept of heroism in war. The film's thesis is that the American public thought these men were symbols of American excellence - a reason to be proud of their country - but the men were too tortured by what they saw and did to find the label fitting. They claim that the true heroes were those who didn't survive and that they were just doing their jobs, fighting not for the country but for the man next to them. What bothers me is that this definition of heroism isn't new, and where the film seeks to problematize heroism, it inevitably retraces ground already covered by other films. Even For Whom the Bell Tolls offers a similar thesis. What is even more to the point is that Eastwood includes several scenes of intense battle sequences that display these men in the roles of traditional heroes. Thus, I think, the film ends up reproducing the stereotypes it attempts to complicate. Overall, I think there are many good elements to Flags of Our Fathers, and I learned something about WWII, but I don't think the film accomplishes all it set out to do.

A true masterpiece this was. Flags of Our Fathers was nothing more than terrific. There were moments when we smiled, teared up, and were in shock. The war scenes were detailed and realistic. And the story was a true work of genius, I loved it. True, the movie was confusing at times but in the need it pulls through. A truly genius film.

Flags Of Our Fathers is based on the non fiction by the same name by James Bradley. James Bradley's father was one of the men who raised the flag on Mount Suribachi. Clint Eastwood adaptation is a flawed but good attempt. One of the biggest problems I had with the film was that there wasn't that many scenes on Iwo Jima. The film is about the six men who raised the flag, and we do get to see that in the film of course, but after that we get see them on a war bonds tour to raise funds for the war effort. I preferred the book personally, but Eastwood does do a good adaptations of the book. But with every adaptation, the book will always be better than film. But this is flawed and I think the second half, Letters From Iwo Jima was far superior to this film. As far as the cast is concerned they do a good job at portraying the real life men. Also I was stunned at a few casting choices, Paul Walker and Jesse Bradford for example. I think they're pretty boys who usually can't act, but I was pleasantly surprised with them in the film. Flags Of Our Fathers, takes a look at the propaganda campaign that followed the famous photograph take by Joe Rosenthal on February 23,1945. We see the impact the picture has back in America, and the US Army decide to take the six men on a war bonds tour to raise funds. With Flags Of Our Fathers we get two sides of the story, the battle itself and the raising of the flag and we get the propaganda side. Clint Eastwood has done a fairly good job at adapting this story and showing the cost of manufactured propaganda. This a good film to watch, and I did enjoy it, but the book offers a more in depth at the battle, the flag raising and the war bonds tour. Flags Of Our Fathers is a well told film and brilliant acted and directed. However there lacks something to make this film better than it is. Luckily if people felt let down by this film, the sequel, Letters From Iwo Jima definitely doesn't disappoint. I view this film as Clint Eastwood trying to find the right way in telling the story of the Battle of Iwo Jima and with Letters he manages to accomplish it. With Flags he was halfway there, and he was able to tell an important and unforgettable story. A flawed but very good film.

Mission Accomplished. I thought it was pretty damn good. Sometimes Eastwood is most un-subtle, making his points two and three times over - but I was definitely caught up in the narrative of the reluctant "heroes". Neither the most original, nor the most coherent war movie: it feels like what it is - a Spielberg/Eastwood collaboration and there is a complete wtf? point-of-view change at the 3/4 mark. Note: Like an idiot, I saw this film AFTER seeing Letters From Iwo Jima. I would recommend seeing Flags first, as it carries much of the exposition of the battle which I felt was missing in Letters.

Flags of Our Fathers Quotes