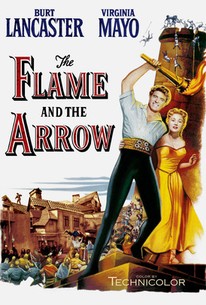 The first of actor Burt Lancaster's filmic associations with partner Harold Hecht, The Flame and the Arrow finds Lancaster cast as Dardo, an Italian Robin Hood battling the occupying Hessian troops. Dardo's stake in the matter becomes personal when his former wife Francesca (Lynne Baggett) moves in with Hessian leader Allenby (Robert Douglas). Francesca demands that the Hessians reclaim her son from Dardo; in retaliation, Dardo kidnaps Anne (Virginia Mayo), Allenby's niece. Allenby responds to this by taking several locals as hostages. This can't go on forever, so Dardo surrenders to Allenby and resigns himself to be hanged. Dardo's cronies, an acrobatic troupe headed by Nick Cravat (Lancaster's former circus partner and lifelong crony), rescue all the good people and wipe out the bad.

Robin Hughes
as Skinner
View All

Critic Reviews for The Flame and the Arrow

Tourneur, working with a script by Waldo Salt, turns the medieval action-adventure tale into a symbol of the French Resistance in the Second World War and locates its roots in class warfare.

Has Burt as acrobatic as you'll ever see him.

...the actor's first big adventure frolic, and it comes off rather well. (Burt Lancaster Signature Collection)

Audience Reviews for The Flame and the Arrow

There are no featured audience reviews yet. Click the link below to see what others say about The Flame and the Arrow!

The Flame and the Arrow Quotes