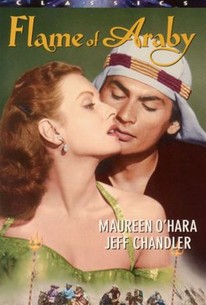 The aggressively Irish Maureen O'Hara and the staunchly American Jeff Chandler are cast as Arabian Nights types in Flame of Araby. Chandler plays Tamerlaine, a Bedouin chief who is engaged in a hunt for a legendary black stallion. Also coveting the prize steed is Tunisian princess Tanya (O'Hara), who wants to capture the horse to race in competition against her hated brothers Borka (Lon Chaney) and Hakim (Buddy Baer). After reels and reels of deadly rivalry, Tamerlaine decides to join forces with Tanya to trap the stallion--and in the process, the two fall in love. Listed as associate producer of Flame of Araby is Ross Hunter, whose later cinematic efforts would eschew desert-sands escapism in favor of lush soap operas and frothy sex comedies.

William Tannen
as Captain of Guards

Barry Brooks
as Guard
View All

Critic Reviews for Flame of Araby

There are no critic reviews yet for Flame of Araby. Keep checking Rotten Tomatoes for updates!

There are no featured reviews for Flame of Araby at this time.