The Flame of New Orleans1941 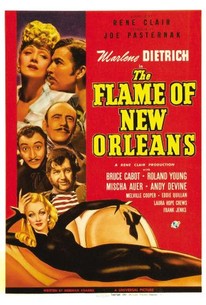 The Flame of New Orleans Photos

Acclaimed French filmmaker Rene Clair made his American debut with this period comedy/drama. Claire Ledeux (Marlene Dietrich) leaves her native France and arrives in New Orleans, Louisiana in 1841, with one goal in mind: marrying a wealthy man. Posing as a pillar of society and a woman of means, Claire sets her sights on Charles Giraud (Roland Young), who is good looking and rich, but she soon discovers that ship captain Robert Latour (Bruce Cabot) is also vying for her hand. However, when Zoltov (Mischa Auer), who knew Claire from the old country, starts dropping heavy hints about her scandalous reputation in Europe, Claire tries to convince everyone that he's really talking about her cousin, even going so far as to disguise herself as the phantom cousin to add weight to her ruse. Three Stooges fans should keep an eye peeled for a brief appearance by Shemp Howard, who plays a waiter; Andy Devine, Franklin Pangborn, and Clarence Muse also appear in the supporting cast.

Mary Treen
as Woman at Ball

Critic Reviews for The Flame of New Orleans

With every picture now, Marlene Dietrich grows more and more a comic. I mean it in the most delightful and flattering sense, for the lady is very droll indeed, and charming also, in The Flame of New Orleans.

The story is appealing, the direction is magnificent, and the photography is excellent. [Full review in Spanish]

Audience Reviews for The Flame of New Orleans

There are no featured audience reviews yet. Click the link below to see what others say about The Flame of New Orleans!

The Flame of New Orleans Quotes