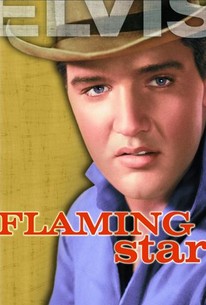 Tensely directed by Don Siegel, Flaming Star is the grittiest of Elvis Presley's post-Army films. Elvis plays Pacer Burton, a half-breed youth in the old West, torn between loyalty to the whites, as represented by his father (John McIntyre), and the Indians, represented by his mother (Dolores Del Rio). A series of brutal Kiowa raids, and the subsequent reprisals by the white settlers, sorely test Pacer's fortitude. Though offered moral support from his loved ones, Pacer is forced to work things out himself. The film was based on a novel by Clair Huffaker. ~ Hal Erickson, Rovi

Douglas Dick
as Will Howard

The Jordanaires
as Vocal Accompaniment

A treasure trove of content for Presleyologists who interpret Elvis as a repository and reflector of America's conflicted and evolving attitudes toward youth, class, race and sex.

The filmmaking may be a little ramshackle, but it's sensitive, and the performances are soulful.

...proves that Elvis didn't just get lucky with his first performance; the boy could actually act.

Famed action director Don Siegel saw an element of raw danger in Elvis and gave him his very best role in this excellent quasi-Western.

Less an "Elvis film" than a western starring young Presley in a surprisingly well cast role, this lean frontier drama... offers one of his most impressive performances.

Among the best Presley features; directed by Don Siegel.

Although the sight of a shirtless Elvis wrestling a native warrior is fascinating enough, there are few surprises in the sequence of events.

Only okay as westerns go and actually very dark at the end but miles ahead of most of the tripe that Elvis was thrown into by the Colonel.