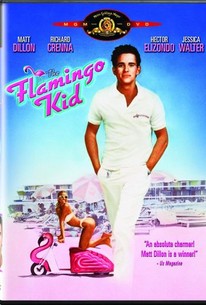 Set in 1963, The Flamingo Kid finds 18-year-old Brooklynite Matt Dillon, the son of blue-collar Hector Elizondo, getting a taste of the Good Life by joining several of his friends at "El Flamingo", a swank Long Island beach club. Wealthy car salesman Richard Crenna, the uncle of Matt's girl friend Janet Jones, befriends the boy and takes him under his wing. Thanks to Crenna's influence, Matt secures a good job at the Flamingo. The boy is bedazzled by Crenna's sumptuous lifestyle, and most especially by the older man's reputation as the Flamingo's reigning gin rummy champ. Dillon begins taking on airs, which alienates his down-to-earth father. Watch for a scene in which, while channel-surfing with his new remote control, Richard Crenna watches a fleeting clip from the old TV sitcom The Real McCoys--featuring Richard Crenna.

Barbarian Brothers
as Turk and Dirk

Melvin Allen
as Himself

Richard Buck
as Man on Lounge

John Turturro
as Ted from Pinky's

Mark Strait
as Bocko from Pinky's

Novella Nelson
as Lizzy the Housekeeper

Mel Allen
as Himself
View All

Critic Reviews for The Flamingo Kid

The movie has an engaging surface, but it's all surface -- it's like watching an outsize TV.

Dillon does a good job in his fullest, least narcissistic characterization to date.

The performances compensate, with Dillon turning in a light and touching portrait of confused ambitions.

As coming-of-age stories go, this one is an underrated treasure with Dillon and Crenna doing fantastic work.

Dillon is a revelation in this movie.

Even if The Flamingo Kid comes out of sit-com country, the character and the performance effortlessly rise above their origins.

It's a small picture but an enormously entertaining and satisfying movie-going experience.

Winning comedy about a have-not among the haves.

The Flamingo Kid is one of those rare films that follows a traditional method of coming-of-age storytelling and then shakes it up by not dealing us mere caricatures and stereotypes.

The Sixties setting seems a shade gratuitous and its attitude to easy money is ambiguous, but the characters are well drawn and the story is sensitively handled.

Professionally made, quite entertaining, and disappointingly hollow.

Audience Reviews for The Flamingo Kid

I don't know if it's because I'm not a fan of Dillon like some other people who reviewed this film, but I didn't think his performance was so great. I just couldn't get into this movie, and found it boring.

This movie is funny,and cute,and Matt Dillion is so ADORABLE!!!