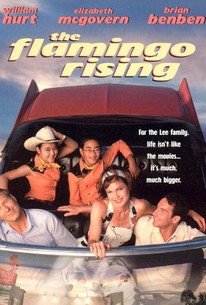 Based on the novel by Larry Baker, this bittersweet comedy-drama focuses on Hubert T. Lee (Brian Benben), an eccentric man with big dreams, who, along with his wife Edna (Elizabeth McGovern) and adopted children Louise Janine (Olivia Oguma) and Abraham Jacob (Christopher Larkin), relocates to Northern Florida in the mid-'60s. When Hubert is able to make a good deal on a large piece of land, he gets a brainstorm and opens the world's largest drive-in movie theater, which he sets out to promote with a variety of increasingly bizarre publicity stunts. However, Hubert's brash demeanor and the festive atmosphere of the drive-in rubs his neighbor Turner Knight (William Hurt) the wrong way; Knight not only lives next door to the Lee family, he runs the formerly quiet funeral home across the street from the drive-in. Produced for television, The Flamingo Rising was first aired as part of the acclaimed anthology series The Hallmark Hall of Fame.

John A. Gallagher
as Gary

Randall Franks
as Officer No. 1

Michael Galloway
as Officer No. 2

Critic Reviews for The Flamingo Rising

There are no critic reviews yet for The Flamingo Rising. Keep checking Rotten Tomatoes for updates!

There are no featured reviews for The Flamingo Rising at this time.