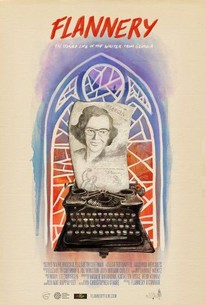 Critics Consensus: Flannery's filmmaking doesn't live up to its subject's classic work, but it remains a reasonably engaging introduction.

Critics Consensus: Flannery's filmmaking doesn't live up to its subject's classic work, but it remains a reasonably engaging introduction.

Critic Consensus: Flannery's filmmaking doesn't live up to its subject's classic work, but it remains a reasonably engaging introduction.

Winner of the first-ever Library of Congress / Lavine Family / Ken Burns Prize for Film, Flannery is the lyrical, intimate exploration of the life and work of author Flannery O'Connor, whose distinctive Southern Gothic style influenced a generation of artists and activists. With her family home at Andalusia (the Georgia farm where she grew up and later wrote her best known work) as a backdrop, a picture of the woman behind her sharply aware, starkly redemptive style comes into focus. Including conversations with those who knew her and those inspired by her (Mary Karr, Tommy Lee Jones, Lucinda Williams, Hilton Als and more), Flannery employs never-before-seen archival footage, newly discovered personal letters and her own published words (read by Mary Steenburgen) alongside original animations and music to examine the life and legacy of an American literary icon.

For those who've read O'Connor and those who haven't alike, it's a strong entry point.

If there's a film or TV version of O'Connor's fiction, clips will be seen. This is distracting. The sound of a typewriter is frequently heard on the soundtrack. (O'Connor was a writer, get it?)

The documentary places its subject, partly by describing her spiritual practices, prayer book and worldview, among the great Catholic writers...

They didn't seem to want to put the complete nature of Flannery O'Connor in this film. To me, that's a fail.

There's a lot of interesting things here and yet Flannery feels incomplete, and -- worse -- a little bit scared to go in for a much deeper dive.

Explanation, the documentary proposes, is not endorsement, and definitely does not match who she was. Instead, O'Connor comes across as the kind of person who says they don't see race, will all that clumsiness that the statement involves.

This overlooked maverick of the Southern Gothic form gets a soup-to-nuts treatment, courtesy of PBS, in this indispensable documentary. Sit down, and read Flannery O'Connor.

Presenting a straightforward biography, Flannery fails to deliver any meaningful insight into the work of Flannery O'Connor.

Fails to do anything beyond scratching the surface.

Expresses the author's genius but goes to tortured lengths to excuse her racism.

There are no featured reviews for Flannery at this time.