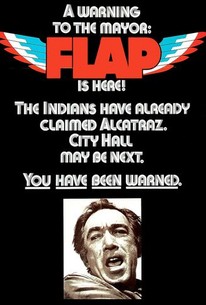 Flapping Eagle (Anthony Quinn) is the drunken American Indian who decides to revolt against the conditions his people must endure. Along with boozing buddy Lobo (Claude Akins), they hire a venerable attorney (Victor Jory) to search for loopholes in old Indian treaties. Dorothy Bluebell (Shelley Winters) is the bordello madame who takes a liking to regular customer Flapping Eagle. Mike Lyons (Don Collier)is the road builder who becomes friends with the Indians after they wreck some heavy equipment. They rope a helicopter and wreck trains to bring attention to the plight of native Americans. Flapping Eagle and the local lawman (Victor French) face off in a final showdown. Taken from the novel "Nobody Loves A Drunken Indian" by Clare Huffaker, the title was changed because of protests by native Americans. The character portrayals are insulting to native Americans, and the film justifiably lost an estimated 6 million dollars at the box office.

There are no critic reviews yet for Flap. Keep checking Rotten Tomatoes for updates!

There are no featured reviews for Flap at this time.