Flashbacks of a Fool2008 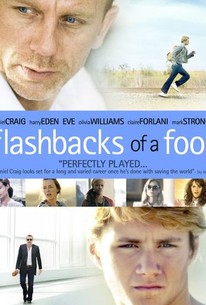 Critics Consensus: Despite Daniel Craig's earnest efforts, Flashbacks of a Fool suffers from an ambitious but underdeveloped script.

Critics Consensus: Despite Daniel Craig's earnest efforts, Flashbacks of a Fool suffers from an ambitious but underdeveloped script.

Critic Consensus: Despite Daniel Craig's earnest efforts, Flashbacks of a Fool suffers from an ambitious but underdeveloped script.

Flashbacks of a Fool Photos

Having squandered his stint in the spotlight on hard drugs and reckless sex, washed-up Hollywood has-been Joe Scott (Daniel Craig) reflects on the summer of innocence and tragedy that would alter the course of his life after receiving news that his childhood best friend has suddenly died. As he makes his way back to the quiet English seaside village of his childhood in order to attend the funeral, he finds his journey into the past becoming a journey of both redemption and self-discovery as well. Oliver Twist star Harry Eden plays the young version of Scott in a drama also featuring Olivia Williams, Claire Forlani, and Eve. ~ Jason Buchanan, Rovi

Jodhi May
as Evelyn Adams

News & Interviews for Flashbacks of a Fool

View All Flashbacks of a Fool News

Critic Reviews for Flashbacks of a Fool

Whiile pic doesn't exactly feel like a vanity project, its weak script might have kept it forever in development hell if debutant writer-helmer Baillie Walsh weren't the topliner's good buddy.

Flashbacks flounders in the final third.

The bizarre secret isn't nearly interesting enough to justify the long buildup to it, and since it amounts to bad luck it doesn't really reveal anything about the actor, anyway.

Without Daniel Craig's 007-enhanced profile, it's unlikely that Flashbacks of a Fool would have appeared anywhere except the Netflix queues of his most rabid fans.

While the dialogue is often hackneyed and full of rushed backstory (not enough flashbacks, evidently), the cinematography excels, particularly the chiaroscuro interiors.

... an uninspired rearrangement of familiar elements, with little emotional force to justify the entire project.

Impressively directed and superbly acted by a terrific cast, this is both a nostalgia-fuelled coming-of-age tale and a genuinely moving drama about making peace with the past.

Craig's shaken-but-not-stirred charisma makes the most of an underwritten part, but the movie nearly flat-lines when the actor's not onscreen, which is often.

An uneven drama that uneasily mixes Hollywood satire and coming-of-age tale, Flashbacks Of A Fool is hampered by its adventurous attempt to link the two. Much like its central character, Walsh's film is stylish but empty.

Audience Reviews for Flashbacks of a Fool

Directed (and written) by Baillie Walsh, Left Turn Films, 2008, Starring Daniel Craig, Harry Eden, Eve, Mark Strong and Olivia Williams. Genre: Drama Question: Do you receive recommendations to see a movie and most of the time you wonder what people saw in the movie that made them like it? Yes, I know I review and recommend movies all the time so maybe just ignore this question. I am still flustered over a movie I just finished viewing on Netflix: Flashbacks of a Fool. Anyway, I wasn't going to review this movie because it hit me hard. I am still trying to figure out exactly why. A friend recommended this movie and their opinion is one that I always take into consideration. But as I like to always say: DON'T TELL ME ANYTHING about the movie so they did not. I am still undecided if that was a good thing or a bad thing. The movie stars Daniel Craig (a.k.a. Bond, James Bond) as a self-indulgent, alcoholic, narcissist who is a very emotionally bruised man. He is obviously trying, desperately, to forget about his past and winds up alone, beaten and at the end of his rope emotionally. He receives some news one morning after a night of debauchery. It's probably the first connection to the past that he has had in years, decades. This just finally pushes him over the emotional edge. The first 20 minutes or so you see the life he has chosen for himself and why he comes to the beach to reflect back on his life after receiving this news. That is when the flashbacks come - it's the late '70's somewhere in England on the coast. We see him as a youth - perhaps 15 or 16 years old with his friend. The story then lends itself towards a sexual coming-of-age story or so I thought. I really don't want to reveal anymore because what happens over the course of the next hour should be viewed with little prior knowledge. But I will say something happened that made me an emotional wreck. Then something happened at the end that ripped me apart. Maybe you won't see it but for whatever reason I lost it and had difficulty containing myself for the next hour or so. This is a profound movie. This is a film about choices and the consequences of those choices especially when it is a selfish one. Daniel Craig was brilliant in this movie. I always knew he could act and I can watch that blue-eyed actor in almost anything. He may even be my favorite James Bond (Yes!). But the first 20 minutes of watching him spiral down the emotional valley was something that everyone should see. I am not sure why this didn't get anymore PR or press when it was out a few years back. It baffles me some days - movies like Flashbacks of a Fool or other wonderful small indie films that don't get more notice. Well, hopefully, with my small little blog I can help people discover these wonderful gems. I also have to give credit to the young man who played the younger version of Daniel Craig's character: Harry Eden. He really did a fantastic job as did all the actors in this small film. My favorite thing: Well, Daniel Craig, of course! My least favorite thing: I can't say... Rating: R Length: 100 minutes Review: 8 out of 10

Meh. Not a dismal film but not very interesting. Daniel Craig does his darned best to save it, but he isn't allowed much room. Olivia Wiliams is always a pleasure to watch... in fact, the performances are quite the only thing I'd give any credit to. The rest is just acceptable: decent cinematography, decent score. Still, the structure is disastrous and the story is aimless in a bad way. Only watchable for a few minutes of Roxy Music lipsynching!! And/or if you want to take a good, good look at Daniel Craig's butt from several angles. Suit yourself.

This drama film manages its details well, but can't control a much bigger problem - the titular conceit - and is crippled by the fact that I never believe they're the same character. Solid performance by Daniel Craig as a man on the brink and Jodhi May is so hot in the sex scenes of the 1972 flashback.

Fairly routine drama enlivened by a strong cast who brought the tale to life.

Flashbacks of a Fool Quotes