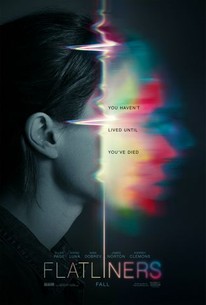 Critics Consensus: Flatliners falls flat as a horror movie and fails to improve upon its source material, rendering this reboot dead on arrival.

Critics Consensus: Flatliners falls flat as a horror movie and fails to improve upon its source material, rendering this reboot dead on arrival.

Critic Consensus: Flatliners falls flat as a horror movie and fails to improve upon its source material, rendering this reboot dead on arrival.

In Flatliners, five medical students, hoping to gain insight into the mystery of what lies beyond the confines of life, embark on a daring and dangerous experiment. By stopping their hearts for short periods of time, each triggers a near-death experience. As the investigation becomes more and more perilous, they are forced to confront the sins of their pasts, as well as contend with the paranormal consequences of trespassing to the other side.

Tyler Hynes
as Lane
View All

Flatliners, the remake, is a good example of how the gene pool doesn't necessarily become stronger with time.

If you find Flatliners to be conceptually interesting (which it is), stay home and rent the original.

Instead, this is yet another cinematic Frankenstein's monster, stitched together out of scavenged parts, and shocked back to life for no clear or compelling reason.

This new version is sadly D.O.A.

This would be boring if it wasn't so unintentionally funny.

What we get is a mediocre remake of a mediocre original - not exactly must-see cinema.

It was so basic... just kind of went through the motions.

In the beginning they sold it to us as a sequel, but then they gave us a very decaffeinated remake that fails in everything. [Full Review in Spanish]

Overall, Flatliners failed because it refused to venture into the unknown, and played safe with characters who wanted nothing but the opposite.

Naomi Soanes
One Room With A View

The biggest sin committed by Flatliners is its complete and utter dullness. It's the cinematic equivalent of drying paint.

Lame, Ellen Page could not save this one. I haven't seen the original in years, but all this did was make me want to watch that one and forget I ever saw this. It's a shame, because actually the cast was decent, but it just falls flat.

A lazy, uninspired and downright stupid remake that overlooks nearly everything that made the original film clever and effective, trying too hard to be more like a horror movie (but failing ridiculously) and not bringing anything remotely clever or new to the pot.

It gets three stars purely because it scared me more than once! But the overall storyline is much to be desired!

When it comes to remaking a movie, I'm all for it if it means that they're going to try and make a better movie out of something that wasn't all that impressive to begin with. That being said, if the original film was already solid or decently received by both audiences and critics, then why bother? Flatliners was a film that was released back in 1990, and I quite enjoy that film, even though the overall product has many issues of its own. I didn't see the reason for a remake, but I could see potential in improving it, so I was open-minded. Sadly, Flatliners is one of the worst films I've seen all year. Taking a solid premise and putting a supernatural spin on it for absolutely no apparent reason, bothered me to no end. Here is why Flatliners fails as both a remake and as an original piece to be shown to a new audience. The idea of doctors being capable of flatlining people and bringing them back to life, being able to have conversations about what death is like and going through hallucinations as a side effect is quite interesting; However, this version of the film becomes a supernatural thriller by the time it reaches its third act, making for a very confusing film, due to the fact that there is clearly no physical entity that could ever accomplish these things. This version of this concept just strips away anything that was exciting or intriguing about the original film. Not to compare and contrast, but idea of Flatliners definitely benefits from a more subdued and subtle approach to things. What bothered me was the fact that the majority of the cast seemed capable of being subdued, but the film's screenplay was such a mess that I found myself thinking these actors/actresses deserved better material. In particular, Diego Luna and Ellen Page were actually very good in their respective roles, making for a few emotionally resonant moments, even though the lines they were given were pretty lame. Quite honestly, with a better script, a title change, and a bit of originality, this cast could've worked in a much better movie. Even though the performances are all decent, the fact that this cast was a bunch of youngsters actually annoyed me. The original film was about a group of experienced doctors who had a neat idea, and were much more capable of being able to bring each other back to life. This time around, it's a group of students who have just enough knowledge in maybe being able to bring each other back. This notion alone was a scripting mistake, because it just becomes a story about naive young students who become obsessed with someone's experiment. I found no attachment to any of these characters and none of them really had a reason for wanting to die (with the exception of one or two without spoiling anything), which left me not caring from frame one. In the end, this film benefits from a strong enough cast (for the most part) and the concept itself is very interesting, but all you have to do is watch the original to see how it should be done. This film tries too many new things, and quite frankly fails at pretty much all of them. Having terrible dialogue, an unnecessary supernatural turn of events, and a climax that turns into a straight up horror flick, I found myself not caring what the outcome for each of the characters would be. The only thing redeemable about this film is the premise itself, which has been done better in the past, so I can't recommend this movie to anyone, but I do recommend checking out the original Flatliners if you haven't seen it yet.