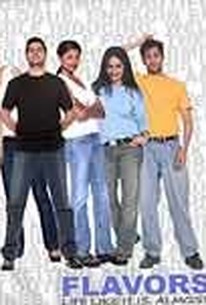 Written and directed by Raj Nidimoru, this romantic comedy follows the love lives of several Indians who have immigrated to America. Flavors centers around the cross-cultural wedding between American WASP Jenni (Jicky Schnee) and Rad (Anupam Mittal), whose Indian parents (longtime Bollywood regulars Anjan Srivastava and Bharati Achreker) are forced to negotiate a middle ground between traditional Indian culture and the culture shock induced by their blonde-haired future daughter-in-law. Meanwhile, immigrant housewife Sangita (Sireesha Katragadda) is given a reprieve from her lonely existence when her recently laid-off husband spends his days at home with her. Rounding out the film are Kartik (Reef Karim) and Racha (Pooja Kumar), a couple whose lives on opposite sides of the country have left them dependent on electronic means of communication.

A good-natured Indian-American romantic comedy in the style of Bend It Like Beckham.

The constant cell phone chatter and pervasive split screen do little to prop up a limp, poorly structured screenplay.

Bright, good-spirited and blissfully short for Bollywood, at a mere 118 minutes.

There's enough schmaltz in the romancer Flavors to keep a second-rate TV sit-com going for an entire season, and then some.

This is light fare, but it draws its strength from a strong ensemble cast, in the spirit of Love Actually, and the sweetness of its characters.

A pleasing sendup of dating, high-tech contract employment and the immigrant experience. If you're Indian-American, you can add five or six stars to any critic's rating.

The cast, a mix of beauty-contest winners, models, veteran actors and newcomers, is as diverse as the characters they play and work together surprisingly smoothly.

By the end the whole thing feels a little like those ubiquitous $10.95 all-you-can-eat Indian lunch buffets. You can't walk away denying that it was extensive -- or even filling. But neither can you particularly remember any of the dishes you were served.

It's an independent film about a specific culture that manages to bring that experience to life for any viewer in a funny, heartfelt, engaging way.

Unevenness in tone and the film's reliance on stereotypes is not uncommon to first feature films, and writers and directors Raj Nidimoru and Krishna D.K. don't help their cause with dialogue that too often asks questions like 'What is life without love?'

There are no featured audience reviews yet. Click the link below to see what others say about Flavors!