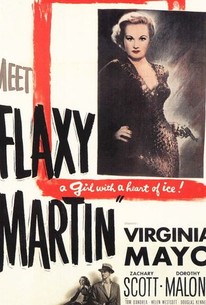 In this drama, an attorney for the mob is framed by a moll whom he jilted. After dumping her, he tries to get away from the criminals, but they frame him for murder and get him imprisoned. Later he breaks out, meets a new, wholesome woman and goes straight. He then gets the mob convicted and returns to prison to serve a much shorter sentence.

Marjorie Bennett
as Neighbor
View All

There are no critic reviews yet for Flaxy Martin. Keep checking Rotten Tomatoes for updates!

Nothing really was happening in this movie & just when I was about to give up & turn it off, the lawyer takes the murder rap for his girlfriend, (Who would do that?!) thinks he can get away with it but gets set up during the trial.I thought after that, I have to see how he gets himself out of this.That was the most exciting thing to happen in Flaxy Martin.I felt like it was all downhill from then on & Flaxy Martin became just another movie to add to my watchlist.I feel like if I decided then & there to turn it off, I wouldn't have missed anything at all.I was really disappointed because after almost giving up on the movie then being glad I didn't give up on it & then being disappointed again was a bummer.It felt like a total waste of time.Maybe you'll like Flaxy Martin but I didn't

Decent little noir with a good cast of Warners standbys. For being the title character Virginia's screen time is rather limited.