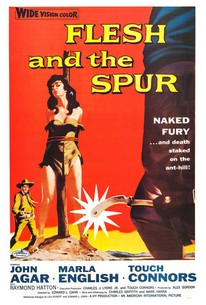 Flesh and the Spur Photos

One of the least-known of the American-International "B" westerns of the 1950s, Flesh and the Spur offers the spectacle of the inimitable John Agar in a dual role. When his twin brother Mathew is killed, Luke Random goes gunnin' for his brother's murderer. Along the way, he teams up with gunslinger Stacey (Touch Connors, aka Mike Connors), who is also seeking out an old enemy. Five points to anyone who guesses before the fadeout who Mathew Random's killer turns out to be. Written by A-I regular Charles B. Griffith, Flesh and the Spur was originally released on a double bill with Naked Paradise.

Buddy Roosevelt
as Outlaw
View All

Critic Reviews for Flesh and the Spur

The only western I can recall that features a barroom brawl between two men using spurs as deadly weapons.

There are no featured reviews for Flesh and the Spur at this time.

Flesh and the Spur Quotes