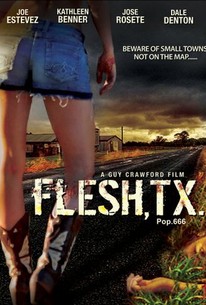 A mother and daughter fall prey to a murderous clan of inbred maniacs after stopping for gas in the small town of Flesh, Texas. When Donna Parker (Eleni Krimitsos) pulled into the Flesh gas station, she could have never foreseen the terrifying events that would follow. In the blink of an eye, her daughter Tabitha (Jada Kline) is gone, and the strange behavior exhibited by the local sheriff (Dale Denton) indicates he knows more than he's letting on. Later, after a run in with town floozie Sugar Barley (Kathleen Benner), Donna kicks her search into overdrive and follows a series of clues straight to the one house in Flesh that nobody dares go near - the Barley place. The Barley's aren't necessarily known for their hospitality, and their method for dealing with unwelcomed strangers could be called anti-social at best.

There are no critic reviews yet for Flesh, TX. Keep checking Rotten Tomatoes for updates!

There are no featured audience reviews yet. Click the link below to see what others say about Flesh, TX!