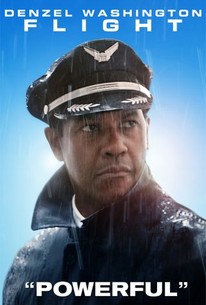 In this action-packed mystery thriller, Academy Award winner, Denzel Washington stars as Whip Whitaker, a seasoned airline pilot, who miraculously crash lands his plane after a mid-air catastrophe, saving nearly every soul on board. After the crash, Whip is hailed as a hero, but as more is learned, more questions than answers arise as to who or what was really at fault and what really happened on that plane? -- (C) Official Site

Carter Cabassa
as Son on Plane

Will Sherrod
as Schechter

Jim Tilmon
as Himself

Darius Woods
as Young Will

Justin Martin
as Will

Laila Pruitt
as Girl on Elevator

Precious Bright
as Mom on Elevator

Digital Multiplex: Now Available in Your Living Room
RT on DVD & Blu-Ray: Flight and Some Excellent Documentaries
In Pictures: The Films of Robert Zemeckis

Flight proves, in a bad way, that believable characters are essential for all good movies.

While his performance here is perhaps not as introspective as it had the potential to become... it is off kilter from his more usual fare these days making it that much more memorable and compelling.

Robert Zemeckis' Flight is worth seeing for Denzel Washington's Oscar-nominated performance as well as a marvellously tense plane crash - but the rest is disappointingly soap opera-esque.

t is hard to think of a film as weirdly paced or as oddly structured as Robert Zemeckis's largely successful return to live-action drama.

Here, after the truly alarming crash sequence, there are no special effects, just deft and committed film-making, letting us see steadily in long takes.

However hampered it is by its own beery bloat, Zemeckis's film is morally provocative and bookended by genius; perhaps it is the first psychological disaster movie.

Denzel brought it in this one and so did most of the other actors. It's a really good movie.

Denzel gives a wild performance in this film that is further enhanced by the supporting work of Don Cheadle, John Goodman and Bruce Greenwood. Could have done without the subplot with the love interest but it doesn't ruin the film.

In Flight, we sit and watch a series of timeless truisms (at best) ... And, as a result, somewhere in the middle of the movie, it all grows a bit tedious.

Washington is so good that he nearly overwhelms the film with a performance that soars far higher than the film itself.

What keeps "Flight" from devolving into a full-fledged Lifetime territory are a strong beginning and Denzel Washington's performance.

A standard tale of addiction ramped up by the quality impetus of the storytellers involved, chiefly Denzel Washington and director Robert Zemeckis. Can a better craftsman deliver a better product? And so two disasters loom: one, a pilot self-destructing on the ground, and two, a plane self-destructing in mid air. Together for the very last time ... It works okay, only the knucklehead emphasis given John Goodman, a cartoon character played like a cartoon, and his musical cues, distract.

Good movie, definitely a must-watch. Different than what I expected - rather than a story about a pilot flying an airplane in an emergency situation, the point is really a story about personal admission, and taking responsibility for a life gone wrong. A lot of full-frontal nudity, abrasive language, and substance abuse in the beginning, but has a very satisfying, feel-good ending. John Goodman really stands out in this, and adds a bit of levity...actually, he was a hoot!

A great visualization from director Robert Zemeckis for making a movie about someone who should be the hero to become the zero and letting the audiences in a gray vote, to vote for him or to blame him.. Denzel Washington undoubtedly gave his best performance for making a performance that actually a jackass but looks like a hero.. The story itself is simple, audiences didn't have to think hard about the story, they just need to make their choices for whom they should stand for.. Overall, Zemeckis once again successfully stole my heart with this movie..