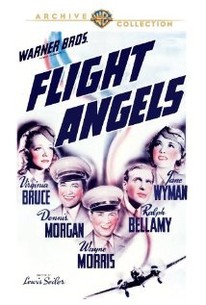 Cleared for takeoff: Flight Angels, an aviation programmer steeped in man-woman attitudes of its time. The story is centered on commercial pilots eager to fly higher (during off-hours they're designing a high-altitude plane) and up-in-the-air attendants eager to land a man (exchanges between the femmes in the Stewardess Lounge are exceptionally catty). Virginia Bruce and Jane Wyman portray two of the title's Angels. Dennis Morgan plays the pilot whose eye problems result in him being grounded by his superintendent (Ralph Bellamy) and sent to the classroom to instruct future flight attendants. He refuses to stay grounded, test-piloting his experimental stratospheric aircraft without authorization.

There are no critic reviews yet for Flight Angels. Keep checking Rotten Tomatoes for updates!

Routine programmer has a good cast on their way up and some fun scenes of catty banter between the stewardesses, Jane Wyman is a particular standout, but its unremarkable overall.