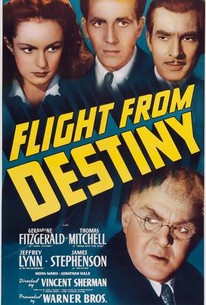 In this drama, a terminally ill college professor with only three months to live asks some younger colleagues what he should do with the rest of his life. One advises him to murder someone who deserves to die. The professor likes the idea and chooses to off a conniving seductress who really enjoys destroying the lives and loves of other people, including two of his ex-students. After he kills her, he turns himself into the cops.

Critic Reviews for Flight from Destiny

There are no critic reviews yet for Flight from Destiny. Keep checking Rotten Tomatoes for updates!

There are no featured reviews for Flight from Destiny at this time.