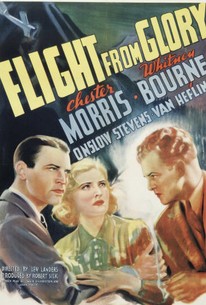 This laudable RKO programmer casts Chester Morris as a fearless pilot whose misdeeds have exiled him to a remote flying field in the Andes mountains. Morris and his fellow pilots are all exiles of sorts, and as such are willing to take on the near-suicidal task of flying supplies to miners in the most treacherous mountain ranges. The all-male atmosphere is disrupted when young air ace Van Heflin shows up with his wife Whitney Bourne. Morris tries to keep the sex-starved pilots away from Whitney, buts ends up falling in love with her himself. Heflin proves himself a weakling, but redeems himself by eliminating evil flight-commander Onslow Stevens. Heflin also dies in this endeavor, leaving a clear path for Morris and Bourne. One could point to Flight From Glory as the precursor to Howard Hawks' more famous Only Angels Have Wings, except that the earlier film succumbs to corniness and cliche a bit too often.

Pasha Khan
as Pepi
View All

Critic Reviews for Flight From Glory

A low-budget programmer fighting for elevation, that's not bad considering not much is expected.

There are no featured reviews for Flight From Glory at this time.