Flight of the Navigator1986 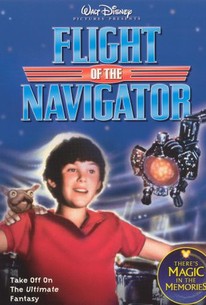 Critics Consensus: Bolstered by impressive special effects and a charming performance from its young star, Flight of the Navigator holds up as a solidly entertaining bit of family-friendly sci-fi.

Critics Consensus: Bolstered by impressive special effects and a charming performance from its young star, Flight of the Navigator holds up as a solidly entertaining bit of family-friendly sci-fi.

Critic Consensus: Bolstered by impressive special effects and a charming performance from its young star, Flight of the Navigator holds up as a solidly entertaining bit of family-friendly sci-fi.

Flight of the Navigator Photos

The year is 1978: 12-year-old David Freeman (Joey Cramer), playing in the woods near his home, is knocked unconscious. He awakens and heads home, only to find strangers living there. He also finds that the year is 1986, and that he's been officially missing for eight years. NASA officials determine that David was abducted by aliens during his blackout, and hope to scan the boy's brain in order to unlock a few secrets of the universe. Answering the call of a strange, unseen force, David boards a well-hidden spaceship and takes off, guided by the jocular voice of a computer named MAX (voiced by none other than Paul Reubens, aka Pee-Wee Herman). Realizing that he can't fit in to 1986 so long as he's a child of the '70s, David hopes to retrace the steps of his alien abductors and get back to his own time.

Kenny Davis
as Kid in Mustang

Paul Reubens
as Max
View All

Critic Reviews for Flight of the Navigator

Flight of the Navigator won't earn a place among Disney's classics. but it's a perfectly entertaining sci-fi movie that does a creditable job with the stale human-meets-alien theme.

When the film shifts into the action mode in its second half -- the flying saucer returns to aid in David`s rescue -- it becomes quite bright and lively.

If there is more than a little something borrowed from Spielberg, Kleiser's movie is amiably undemanding entertainment that says the right things, albeit without great originality.

Whereas its plot may be derivative--and at several junctures, unconvincing--"Flight of the Navigator" nevertheless manages to develop considerable humor and poignancy from David's predicament and what he does about it.

Never brave enough to feel far-reaching (or, ironically, far-fetched, when time-travel and space flight are so popular at the movies), Navigator still fulfills its mission, distracting the family for bang-on an hour and a half.

When you add up all the evidence, Flight of the Navigator remains one of the most underrated pinnacles of the sci-fi genre, a euphoric mix of pop culture nostalgia and feel-good entertainment.

Flight of the Navigator, the Disney studio's new movie aimed at children, has the warmed-over feeling of other time-travel yarns. But the story is snappily told and is sure to keep youngsters enthralled.

Flight of the Navigator is almost like two movies in one -- a creepy sci-fi mystery and a BFF road trip comedy all squished up together.

The brain-assaulting sci-fi second half of Flight of the Navigator is made palpable by Cramer, who deftly conveys anguish during the first half. Now, he wants to go home and his gung-ho attitude makes every dumb effect exciting.

Flight of the Navigator, in spite of a rough beginning, soars as it should, taking a child on the journey of his life.

Audience Reviews for Flight of the Navigator

Always loved this Disney flick, great effects and adventurous plot that is kinda 'Back to the Future' mixed with 'Explorers' purely for kids with an extraterrestrial twist. The effects were fantastic for the time and it was the first film to use environment mapping, the CG was some of the first used in motion pictures and in my personal opinion they still hold up very well today, I might add they also used stop motion in the mix too! truly classic workmanship. As said the effects were always the star attraction with this film, the ship looked way cool (simple design for today of course), the hydraulic alien arm thing inside was nicely designed, the ships interior was really well designed and looked almost like the interior of the 'Predator 2' ship whilst the other aliens creatures were all decent muppet style creatures which were simple fun and amusing. The whole film was so well made and showed so much vivid imagination, it was colourful and a really exciting ride for kids at the time, I loved every minute of it. The only thing I never liked was Paul Reubens voice as the alien later on in the film, that spoilt the sensible aspect of the plot and made it stupid with his 'Pee Wee Herman' voice. SJP made up for it being very very cute and one of my first kid crushes :)

This lively alien-fantasy-action film is exciting without relying on agression. The extra-terrestrial creatures are bad Muppet imitations, although that alien with a cold is a gem. As a NASA intern, Sarah Jessica Parker looks the same as she does now.

Another movie I saw as a kid, this sci-fi adventure is pretty cool, but very much for kids. I don't think I'd like it as much today.

Flight of the Navigator Quotes