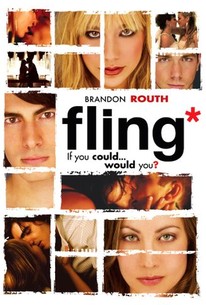 Lie to Me (Fling) Photos

Director/co-screenwriter John Stuart Muller helms this lively comedy concerning the quirks of modern romance, and the complications that come when an outwardly loving couple becomes polyamorous. Appearances would suggest that published novelist Mason (Steve Sandvoss) and twenty-something fashion designer Samantha (Courtney Ford) are the perfect couple; though unmarried, they live together, sleep together and shower together. At Samantha's sister Allison's (Ellen Hollman) beautiful spring wedding, however, Sam reencounters her ex-boyfriend, James (Brandon Routh), a surprise guest at the event. The two rekindle their old romance. But Samantha isn't the only one in this marriage with a wandering eye, because Mason begins flirting heavily with the 18-year-old Olivia (Shoshana Bush); the committed scribe and his younger paramour sneak into the hot tub for a particularly steamy encounter. Later spotted by Mason as she attempts to slink out of James' room undetected, Samantha decides to coming clean about the affair. Mason's response proves entirely unexpected.

Critic Reviews for Lie to Me (Fling)

Audience Reviews for Lie to Me (Fling)

Interesting story plot that centralizes around a young couple who embrace open relationships, but when various troubles arises. The solidarity of their relationship is tested. Brandon Routh, Courtney Ford, and Steve Sandvoss stars. Worthy!

Lie to Me (Fling) Quotes