The Flintstones in Viva Rock Vegas (2000) 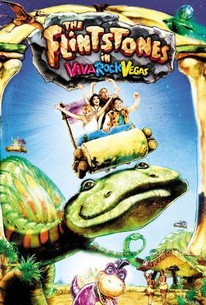 Critics Consensus: The prequel to the first full-length feature set in Bedrock, Viva Rock Vegas is a surprising improvement over The Flintstones. Aimed towards an audience of adults and children alike, critics feel Viva will appeal to a broad range of viewers.

Critics Consensus: The prequel to the first full-length feature set in Bedrock, Viva Rock Vegas is a surprising improvement over The Flintstones. Aimed towards an audience of adults and children alike, critics feel Viva will appeal to a broad range of viewers.

Critic Consensus: The prequel to the first full-length feature set in Bedrock, Viva Rock Vegas is a surprising improvement over The Flintstones. Aimed towards an audience of adults and children alike, critics feel Viva will appeal to a broad range of viewers.

Before the Flintstones were everyone's favorite Stone Age family, Fred was just a regular guy looking for the girl of his dreams, and his romance with Wilma sets the stage for this prequel to the 1994 screen adaptation of the popular cartoon series. Fred Flintstone (Mark Addy), a working-class caveman who earns his living at Mr. Slate's quarry, falls in love with wealthy heiress Wilma Slaghoople (Kristen Johnson). While many people think that Fred is out of his league, including Wilma's mother Pearl (Joan Collins) and her father Col. Slaghoople (Harvey Korman), he's determined to win her heart. And when his best friend Barney Rubble (Stephen Baldwin) decides to take his best girl Betty (Jane Krakowski) for a fun weekend in Rock Vegas, he invites Wilma to tag along. The Flintstones in Viva Rock Vegas recasts all the major roles from 1994's The Flintstones; Harvey Korman is the only actor to appear in both films, though in different roles (in the previous movie, he was the voice of the Dictabird).

William Hanna
as Himself

Joseph Barbera
as Himself

CRISTAL WILLIAMS
as Rockette
View All

News & Interviews for The Flintstones in Viva Rock Vegas

View All The Flintstones in Viva Rock Vegas News

Critic Reviews for The Flintstones in Viva Rock Vegas

Um, no surprises here. Better than the original.

What’s with the film’s odd preoccupation with such adult themes as class, money, and sex?

Kids will love the crowd-pleasing depiction of an entire prehistoric world, complete with an adorable baby Dino -- and loads of great sight gags and puns.

It is better than the original.

Falls from interestingly loopy to tiresome.

Not bad, not bad at all.

This prequel packs a few more laughs than its 1994 big-screen predecessor.

Kids under 10 who love the cartoon, are apt to really enjoy this movie. Adults who remember the show with fondness, will find it easier to take than many kiddie matinees they have suffered through.

If you liked the first Flintstones movie, you will love this one.

Audience Reviews for The Flintstones in Viva Rock Vegas

it was just an average movie with a few chuckle moments

This is one of the worst movies I have seen. The only good choice in my books is Mark Addy playing the character he was obviously genetically engineered for (still, no John Goodman). This film is absolutely terrible, a film which you would want to avoid like the plague. The plague carried in little bowls by Satan's henchmen. Who are also holding chainsaws. Giant chainsaws. You get the picture. Terrible movie. Defining Scene: I refuse.

"The Flintstones in Viva Rock Vegas" isn't what you would expect it to be. Instead of being a sequel to the "The Flintstones," it's a prequel. It shows how Fred, Wilma, Barney, and Betty came to meet in the first place. Oh yeah, don't forget the well animated Dino. You'll find out some things about Wilma, Barney, and the others that you most likely never knew about, such as Wilma being rich. If you've ever watched the cartoon series in your life, then you'll already somewhat know how this movie turns out, such as Fred and Wilma being together, but you'll find out a lot of interesting stuff along the way and find out that everything wasn't all smooth sailing for the Flintstones and the Rubbles. I used to watch the cartoon series of The Flintstones when I was a kid, but I didn't like the movie, "The Flintstones" much at all. "The Flintstones in Viva Rock Vegas" is a much better movie than the first one in my opinion. Parts of it are hilarious, and the whole movie is very entertaining. My only complaint is that I sort of doubt that a few parts of the story hold true for a stone age family, such as Mick Jagger being alive and Coca-Cola existing. But there are some of the famous Flintstone antics such as a dinosaur being used as a bridge. If you've ever been a fan of the cartoon series, and even if you haven't ever been much of a fan, I would recommend watching "The Flintstones in Viva Rock Vegas." It has good acting, it's funny and entertaining, and it has good effects that make it look like a live episode from The Flintstones. NOTE: That was my Amazon review from the year 2001. I liked this movie much better than the original.

A heck of a more fun than the first Flinstone film adventure. They got things much closer to the Flinstones cartoon with this one. There are much better jokes, and the actors look more like the characters. A real treat!