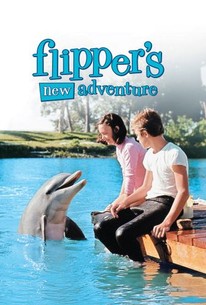 One year after the success of producer Ivan Tor's Flipper came this sequel about the super-dolphin and his pal boy, Sandy (Luke Halpin). This time the chums are threatened a break-up at home in the Florida Keys, so they high-fin it to a small Bahamian island. It just so happens that nearby is a wealthy British family being held captive by three kidnappers. The amazing team of kid and fish prove to be indespensible in putting an end to the criminals' scheme. Brian Keith, playing Sandy's father, along with Halpin, would go on to appear in the syndicated television series that began its run the September following the release of New Adventure. Flipper, of course, would remain the star--though offscreen he is actually a she--Susie the Dolphin.

Susie
as Flipper
View All

Flipper the TV series was made before my time, but I grew up watching reruns of the classic series. As long as I live, Flipper will always be one of my favorite TV series of all time. Just like the TV series, the famous dolphin named Flipper is here in "Flipper's New Adventure" making rescues, helping people, and just being the good old talented Flipper that performs amazing exploits in the water. In this movie, Brian Kelly makes his debut as Porter Ricks, Luke Halpin plays as Sandy, and Flipper is played by...Flipper. In "Flipper's New Adventure," (yep, it's a full-length movie), Flipper and Sandy use an island as a hideaway and they both later get tangled up in a kidnapping exploit. If you're familiar with the TV series, then you'll pretty much know what to expect from this movie. Unlike the Leonard Maltin review says, this movie is not just for kids, it's for anybody who has ever liked the TV series, or for anyone who likes good movies. I recommend it all the way! NOTE: That was my Amazon review from the year 2001.