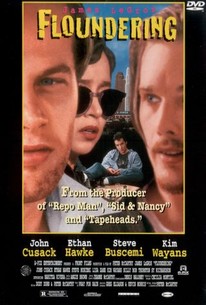 Noted independent film producer Peter McCarthy made his writing and directing debut with this surreal comedy. John Boyz (James LeGros) is an aimless sad sack who is wandering Los Angeles in the wake of the 1992 riots. John is in an unclear state of mind; he can't find a job (and doesn't really want one), the IRS has confiscated his money, his girlfriend Jessica (Lisa Zane) is sleeping around, he can't figure out what the beautiful but mysterious Elle (Marzita Rivera) wants from him, his drug-addicted brother Jimmy (Ethan Hawke) needs 3,000 dollars for a detox program, and police chief Merryl Fence (Nelson Lyon) is encouraging the citizens of L.A. to kill themselves. A stellar roster of actors and musicians appear in cameo roles, including John Cusack, Steve Buscemi, Billy Bob Thornton, Viggo Mortensen, Jeremy Piven, Dave Navarro, Dave Alvin, and Exene Cervenka. ~ Mark Deming, Rovi

This first feature by independent producer Peter McCarthy is fairly lightweight, but the cast and low-rent production credits have a certain charm.

While the disjointed tale of contemporary alienation doesn't always connect the dots, it has a raw energy and sense of fun that's infectious.

Because the speechifying lacks the cutting comic edge that distinguishes good satire, Floundering too often blubbers when it should be viciously funny.

It's an engaging, occasionally hilarious story that occasionally seems as though someone had finally gotten hold of all that twentysomething malaise without intent to exploit.

The movie gets a lot of mileage out of a seemingly simple concept.

Yet another quirky independent comedy about a disenfranchised white male urban slacker, Floundering is distinguished mainly by its left-leaning politics and numerous cameos by boho thespians and alternative rockers.

One of those "chatty slacker" flicks that actually delivers some interesting characters and worthwhile conversations.

For those who enjoy their comedy with an edge and don't mind the occasional preaching, there's a real winner to be found in Floundering.

Floundering has floundered so thoroughly by the time of this catharsis that it, like everything else in the film, falls flat.

There are no featured audience reviews yet. Click the link below to see what others say about Floundering!