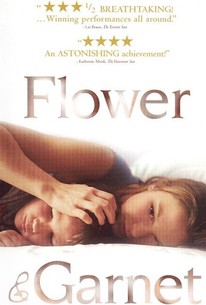 The family drama Flower & Garnet is the feature-length debut from Canadian filmmaker Keith Behrman. Ten years after the death of the family matriarch, the widower and her two children are still coming to terms with their lives. Daughter Flower (Jane McGregor) gets pregnant and moves out. Her younger brother, Garnet (Colin Roberts), is an odd child who has trouble connecting with father Ed (Callum Keith Rennie). One of Ed's former girlfriends, and a gun, are key to the plot. Flower & Garnet was screened at the Montreal World Film Festival.

Philip Granger
as Fred
View All

Behrman has a lot of demons and a little bit of skill--enough to make you wonder about his next movie, though not enough to save this one.

A hauntingly quiet film that honestly explores the emotions of guilt, blame and hope.

This is the sort of film that assumes thinking adults sometimes go to the movies.

Hmm..didn't realize this was Canadian. I thought it had the feel of a good low budget European effort. I liked this film quite a bit particularly from the little guy Arnie Walters and how he deals with very dangerous behaviour to deal with the passing of his mother.