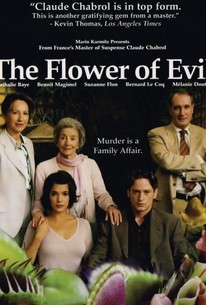 The Flower of Evil Photos

Co-written by Caroline Eliacheff, Claude Chabrol's La Fleur Du Mal (The Flower of Evil) concerns three generations of the bourgeois Charpin-Vasseur family. The story opens in the present day with a murder occurring during a local election and son Francois (Benoit Magimel) returning home to Bordeaux after four years in the U.S. His father Gerard (Bernard Le Coq) is a suave and successful pharmaceutical manufacturer, while his stepmother Anne (Nathalie Baye) is in the process of running for local office. Francois has long harbored a strong interest in Anne's daughter, psychology student Michele (Melanie Doutey), and - despite the fact that they are related in various ways - they begin a torrid affair. Then, right before election night, a letter appears, revealing negative information about the family's past concerning the elderly Aunt Line's (Suzanne Flon) connection to a crime dating back to WWII. La Fleur Du Mal was nominated for the Golden Bear at the 2003 Berlin International Film Festival.

Critic Reviews for The Flower of Evil

The strength of this movie is how it starts as a standard whodunit only to become something else: a cunning Chabrol study of incest and old money peppered with a wicked sense of humor.

Leave reason behind, back in steerage class, and simply breathe in the foibles of the (upper) crust on this crème brûlée.

Told without drama, as if this were just an ordinary family, it is the subtleties of the details that win you over.

Each of the characters in the film is so real, so fully drawn, that you feel you know him or her as a person, not as fiction.

One of Chabrol's lesser works.

Chabrol's examination of intergenerational guilt takes awhile to arrive at the station, but the characters and dialogue -- screenplay by Caroline Eliacheff -- are sophisticated and properly witty.

Shows little concern with thriller conventions or with interior psychology, as Chabrol is content to simply push his characters around like pieces on a chess board.

There's a solid message here about wealth and hypocrisy, but it's watered down by the opaque storytelling.

Chabrol has his moments of visual wit ... but mostly The Flower of Evil is a poky and uninvolving thriller of knotted family ties and convoluted histories.

Neither as shocking nor as enlightening as it obviously intends to be -- or as it believes itself to be.

Chabrol's major theme seems to be that life is cyclical and history repeats.

Audience Reviews for The Flower of Evil

A rather competent drama, but not spectacular in any way beside the absolute cuteness of Melanie Doutey, who has the sweetest and most loveable smile I ever seen on screen. The incest angle in my opinion is rather weak and sensationalized, as are the murders past and present. This story is more like a mild, luke warm cup of coffee. I just prefer mine to be stronger and hot. Not a bad watch though

A decent if not completely unremarkable French thriller. It isn't that there's anything wrong with The Flower of Evil, per se, but I feel like I've just spent 100 minutes watching absolutely nothing new. The themes are interesting if not completely broad, the characters are nothing special, and the humor seems oddly thin. It's a very pretty, expertly acted waste of time.

The Flower of Evil Quotes