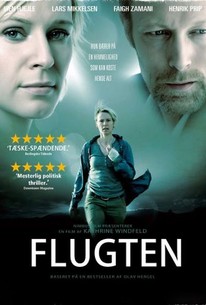 As helmed by Scandinavian director Kathrine Windfeld, this intense Danish and English-language political thriller concerns Rikke Lynvig, a Danish journalist whose life is turned upside down and pushed to the brink of destruction when she's seized by the members of a violent terrorist cell and taken hostage in Afghanistan. Rikke's fate turn a corner when one of her captors, Nazir, suddenly unveils a theretofore unseen level of sympathy and aids her escape; after the young woman returns home safely and discovers that she has become an unlikely celebrity, Nazir pays her a visit and reveals that he has attained political asylum in Denmark.

There are no critic reviews yet for Flugten. Keep checking Rotten Tomatoes for updates!

There are no featured audience reviews yet. Click the link below to see what others say about Flugten!