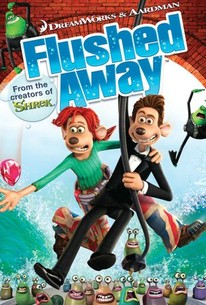 Critics Consensus: Clever and appealing for both children and adults, Flushed Away marks a successful entry into digital animated features for Aardman Animations.

Critics Consensus: Clever and appealing for both children and adults, Flushed Away marks a successful entry into digital animated features for Aardman Animations.

Critic Consensus: Clever and appealing for both children and adults, Flushed Away marks a successful entry into digital animated features for Aardman Animations.

A previously pampered society mouse must fight his way back to the comforts of Kensington after he is sent spiraling into an underground world filled with scavenger rats and villainous toads in a fun-filled family adventure produced by DreamWorks Animation and Aardman Features and featuring the voices of Hugh Jackman, Kate Winslet, Ian McKellen, and Jean Reno. Roddy (Jackman) was living the high life when he first met Sid the sewer rat (Shane Richie), but that's all about to change when Sid decides to send the hapless mouse down the pipes and stealthily take his place in the lap of luxury. Though the bustling sewer city of Ratropolis isn't without its fair share of kind citizens, it is certainly no place for a pampered mouse with a taste for life's finer things. Upon making the acquaintance of scavenger rat Rita (Winslet), Roddy is certain that the pair can navigate their way back to the surface in Rita's trusty boat, the Jammy Dodger, but Rita's help doesn't come cheap, and the nefarious Toad (McKellen) is determined to rid Ratropolis of all things rodent. When Toad's hapless hench-rats Spike (Andy Serkis) and Whitey (Bill Nighy) fail to achieve acceptable results, the green meanie is forced to call in the cavalry in the form of legendary French mercenary Le Frog (Reno) to get the job done. ~ Jason Buchanan, Rovi

Conrad Vemon
as Take Out

News & Interviews for Flushed Away

View All Flushed Away News

Critic Reviews for Flushed Away

A witty combination of jokes for both adults and kids.

Like a mouse on a spinning wheel, it's a film that moves at a breakneck pace but ultimately goes nowhere.

The action sequences mostly uninspired and the characterisations and voice-overs underwhelming.

The best animated movie of the year and only a whisker shy of the brilliance of Wallace and Gromit.

Somewhere in the transition between plasticene and pixels, Aardman's uniquely gentle charm has disappeared. What remains is a frantic, deadening affair that's easy to admire but hard to love.

Flushed Away is sweetly silly and consistent - it is the perfect story for a few hours' respite.

This movie has so many ingredients that I should love... [but] I find the characters all to be unlikable.

Flushed Away, directed by David Bowers and Sam Fell, is creatively realized, especially in how it takes "found" materials underground and re-imagines London landmarks.

Aiding the movie greatly is its excellent voice casting.

It's smarter than all the other 2006 animated movies, save for Monster House.

The result is a movie that has glossier and more elaborately designed backgrounds while retaining the traditional values of storytelling and performance -- and, of course, talking animals.

Audience Reviews for Flushed Away

Cute and silly fun under jolly ol' London Town when a fancy kept house mouse is thrust into the sewers and gets to hobnob with the regular ol' locals AND to meet the handy girl of his dreams (actually the reverse of how this formula usually plays = rich, spoiled girl meets jack of all trades regular bloke). The treat of this playground of the imagination is how you get from point A to point B, with more visual cheesy puns (including a French mime/ninja frog) than you can count, and is capably assisted by pretty prestigious voice casting. You might not laugh but I dare you not to smile throughout on this cheeky trip through London's Underground. No, not THAT one, but below that.

Aardman have gone and made another smart and clever animation, that features humor for both adults and children. Primarily, the humor is created through the superb choice of voice actors. From Hugh Jackman and Kate Winslet, to Bill Nighy, Andy Serkis and even Ian McKellen. 'Flushed Away' does features very few but clever references to another Aardman masterpiece, 'Wallace & Gromit'.So those who love the cheese loving duo, do your best to seek them out.

It was enjoyable but lacked something.