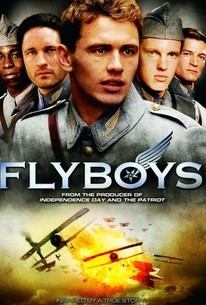 As World War I rages in Europe and Allied forces in France, Italy, and England find their resolve quickly diminishing due to the overwhelming force of the German juggernaut, a handful of brave American soldiers volunteer to join their French counterparts in learning to fly and fighting for freedom from above as the true story of the legendary Lafayette Escadrille comes to the screen in a breathtaking war adventure from Academy Award-winning director Tony Bill and famed producer Dean Devlin. They have come from all over the United States, ready and willing to put their lives on the line despite their country's initial pledge to not get involved with the all-consuming war that rages throughout Europe. Few could have foreseen the challenges faced by the world's first fighter pilots, however, and upon arriving at their aerodrome in France, the aspiring aviators are assigned to a new squadron under the command of war-ravaged Captain Thenault (Jean Reno) and battle-weary American pilot Reed Cassidy -- the sole survivor of his devastated former air brigade. With little encouragement from their fellow aviators and nothing to drive but their unifying goal of taking to the skies and offering up their lives in the name of freedom, the determined airmen of the Lafayette Escadrille set out to make history by embarking on the adventure of a lifetime. James Franco, Martin Henderson, and David Ellison star in a script penned by Phil Sears, Blake T. Evans, and David S. Ward.

Hayley Downing
as Marie
View All

Flyboys doesn't just use cliches - it wallows in them, feeling more like a film based on old war movies than actual history.

While director Bill nails the sheer spectacle of squads of SPADs dovetailing in flames into the wide blue yonder, the earthbound action (much as it was in another sputtering epic, Michael Bay's Pearl Harbor) is strictly laissez-faire.

Aafter a while -- there must be six major fights against unending numbers of German planes -- it feels like special effects run amok.

Why make such a corny and incredibly predictable film?

The painstaking authenticity and appealing cast of Flyboys can't overcome the cloyingly formulaic nature of its story.

This is old-school moviemaking, for better or worse, which means rat-a-tat dogfights in the sky combined with overripe romantic and social clichés on the ground.

There's even a scene involving an old Zeppelin thrown in for good measure!

Unfortunately, all that I see for Flyboys is it flying into the sunset and away from the box office charts with its rudder tucked beneath its wings.

Each air battle has been scripted as a set piece that not only shows off the capabilities of the pilots and their machines, but also advances the plot. Bring your Dramamine!

It may indeed be inspired by a true story, but what we see onscreen is simply "Star Wars" set in some fantasy French air base circa 1917.

The characters, although based on real life people, are one-dimensional stereotypes that exist for the sole purpose of presenting indistinguishable flesh-and-blood pilots for superabundant air battles.

The best of Pearl Harbor meeting the worst of HBO's Band of Brothers.

This is a great movie about flying aces during WW1. A small group of Americans go to France to join the flying corps and battle the German flying aces, alittle cliched in places, alittle smoochy here and there and rather predictable to be honest but this is good boys own Biggles type stuff based on fact. The effects are great and do the job, the dogfights are really excellent and quite tense whilst the acting is ok, not great but worthy enough. The story sucks you in with its brash tale of young aces and romance and its not hard to get behind the heroes and cheer as they bring down the bosh haha. Overall its not really graphic with the bloodshed and not extreme in any way but it does the job of showing how the pilots fought and what they went through, with alittle Hollywood sparkle of course ;) Think 'Memphis Belle' with better effects and abit more realism, good fun with a caring heart to the facts. Scarfs on and chocks away chaps.

It really wanted to be good, but it was just too cheesy. The dialogue, acting and plot cliches were just too annoying for me to enjoy the movie as a whole, despite the fact that some of the dogfight scenes were pretty cool.

What a wonderful film! Right from start to finish I enjoyed every bit of it!

Solid special effects and good acting by Franco make this film good enough to be worth multiple watches. A story about WWI flying aces with todays special effects was long past its due.