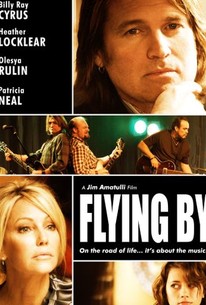 A successful real estate developer rediscovers his adolescent dreams of becoming a rock star after spontaneously performing with his old band at their 25th high school reunion in this musical drama starring Billy Ray Cyrus and Heather Locklear. George Barron (Cyrus) always dreamt of performing before thousands of adoring fans, but when life got in the way, he embraced the responsibilities of adulthood. Twenty five years later, George is attending his high school reunion when his old band-mates summon him on stage for an impromptu performance. Almost instantly, George is transported back to his youth, and it feels like the group never stopped playing together. When the band convinces George to take part in rehearsal and their first gig together proves an unmitigated success, they receive an offer to open for a high-profile reunion tour. Unfortunately George's wife Pamela isn't very enthusiastic about the prospect of her husband becoming a rock star, and when reawakened dreams collide with real life, the aspiring rocker is forced to weight his ambition against his business, his marriage, and his devotion to family.

Critic Reviews for Flying By

There are no critic reviews yet for Flying By. Keep checking Rotten Tomatoes for updates!

Audience Reviews for Flying By

There are no featured audience reviews yet. Click the link below to see what others say about Flying By!