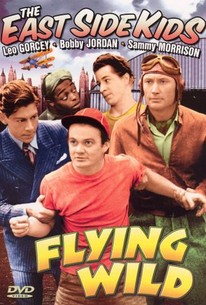 Mugs McGinniss (Leo Gorcey), top dog of the East Side Kids, takes a job at an airplane plant. Here he grows suspicious of Dr. Nagel (George Pembroke), operator of a flying ambulance service. Mugs becomes convinced that Nagel is using his plane to smuggle aviation secrets to a gang of enemy agents, but he can't prove his allegations. With the help of his East Side pals Danny (Bobby Jordan), Scruno ("Sunshine Sammy" Morrison), Peewee (David Gorcey) and Louie (Bobby Stone), Mugs gets the goods on the duplicitous Doc-but nearly gets killed in the process. A not-bad combination of comedy and melodrama, Flying Wild offers the viewers a more intelligent group of "East Side Kids" than they're accustomed to. Even so, this is the film in which Leo Gorcey introduces the comic malapropisms for which he became famous.

There are no critic reviews yet for Flying Wild. Keep checking Rotten Tomatoes for updates!

There are no featured reviews for Flying Wild at this time.