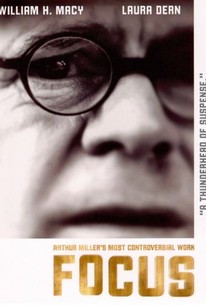 Critics Consensus: Though full of good intentions, Focus somehow feels dated, and pounds away its points with a heavy hand.

Critics Consensus: Though full of good intentions, Focus somehow feels dated, and pounds away its points with a heavy hand.

Critic Consensus: Though full of good intentions, Focus somehow feels dated, and pounds away its points with a heavy hand.

In New York, during the height of World War II, an American community begins to unravel when a man and his wife become victims of mistaken identity. Lawrence Newman is an ordinary man who does not want to stand out in a dangerous world. Even when a woman is attacked outside his Brooklyn window, he remains quiet about what he saw, unwilling to make waves and so fearful, he even begins to question what he truly saw. But then unassuming Newman and his outspoken new wife, Gertrude, become caught up in a case of mistaken identity. Slowly ostracized at home and work, they learn the value of solidarity as they struggle to maintain their dignity while confronting their nation's lurking anti-Semitism. The unwitting focus of his neighbor's prejudice, Newman is faced with a choice: go down as a coward or take a long shot at becoming the unlikeliest of heroes by telling the truth.

Peter Evans
as Man in Theater

Tedde Moore
as Woman No.1 in Theater

Anna Louise Richardson
as Woman No. 2 in Theater
View All

It serves as a forceful reminder of how small a difference there can be between unity and bigotry.

No actor in the movies could have played this part better than Macy.

Performances, the story's historical origins, and the inherent goodness and contemporaneity of its storyline make Focus a movie worth viewing.

Focus is well-meaning, but it's all looks with no substance.

A powerful though overwrought study of bigotry and fear.

The topic certainly suits the times, but the director's approach is as alienating as it is old-fashioned.

Its fine cast, particularly Mr. Macy, lift it above its limitations and lend grace to its once-again timely message.

Its most relevant message for today is a warning against vigilante ethnic cleansing.

The most striking thing about the film is the use of color. First-time director Neal Slavin has the kind of eye for color one would expect from an award-winning photographer.

Put this one in the category of decent material, good cast, and misguided execution.

This movie was so true to the book that I felt like I had seen it before. The book was a little more detailed, so I have to say I liked that better. However the movie was very well acted and captured the right feel and emotion.

I think that they need to show this movie in every Sociology class. It's a perfect example of how, for example, Hitler's Germany was even possible. It shows how easily people can be manipulated and influenced by hateful thinking in society. It was an apalling thing to watch unfold, and intensify, but it was at the same time an amazing thing to watch. Scary, but amazing. ..On a side note, William H. Macy was fantastic, as usual.