Folies Bergère de Paris, (The Man from the Folies Bergere) (1935) 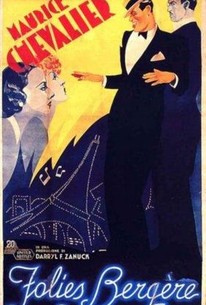 In this lively musical, debonair Maurice Chevalier plays a popular performer at Paris' most notorious hotspot. One reason he is much loved is that he bears an uncanny resemblance to the prominent Baron Cassini, a person the performer frequently mocks. The Baron is having severe financial difficulties and may lose his fortune if he cannot make two simultaneous appointments. But of course, he hires the performer to impersonate him at a grand ball. Unfortunately, the Baron neglects to tell the Baroness and the performer does not tell his girl and such is the beginning of many merry romantic mix-ups. This film was shot in two simultaneous versions, one French and one in English. In the former, the women were portrayed by different women, and the Folies Bergere dancers performed topless. The final production number "Straw Hat" earned choreographer Dave Gould an Academy Award.

Max Barwyn
as Waiters in Box

Critic Reviews for Folies Bergère de Paris, (The Man from the Folies Bergere)

On the whole, Folies Bergeres de Paris is a rather minor Chevalier item, with its special entertainment features too thinly spread out to cover the threadbare plot.

... it still gives Chevalier a better chance to demonstrate that really magnificent charm of his which has hitherto been so stupidly suppressed and dulled by his Hollywood management.

Audience Reviews for Folies Bergère de Paris, (The Man from the Folies Bergere)

The story is ordinary but the dance sequences are wonderful.