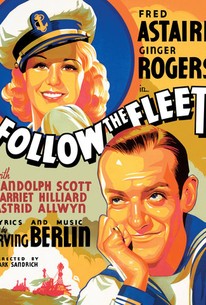 This lesser Astaire/Rogers vehicle is one of several screen versions of the venerable Hubert Osborne stage play Shore Leave. For reasons unknown, Fred and Ginger are virtually supporting players here, spending most of their time trying to patch up the romance between Fred's fellow sailor Randolph Scott and Ginger's sister Harriet Hilliard (better known as Harriet Nelson, of Ozzie and Harriet fame). One of the sillier aspects of the plot hinges on raising enough money to renovate a broken-down old ship; to do this, Fred and Ginger stage a lengthy musical number that must have cost five times as much money as they raised! But that number, a languorous dance rendition of Irving Berlin's "Let's Face the Music and Dance", compensates for all the nonsense that has gone before. One fringe benefit of Follow the Fleet is spotting two fresh-faced starlets named Betty Grable and Lucille Ball.

Eric Wilton
as Butler at Party

Burdened with a dull plot but blessed with a rousing Irving Berlin score.

The inspiration for this was the thought that Fred Astaire ought to be shown in something besides tails sometime, so why not a naval jumper-suit? The pants have a nice flare. Irving Berlin had the rest of the inspiration.

The world's greatest stepping pair surpass themselves as usual.

It needs an effort of the mind to remember that Mr. Fred Astaire was not invented by a film director and drawn by a film draughtsman. He is the nearest we are ever likely to get to a human Mickey [Mouse].

...the standout numbers here, ironically, are the solo ones.

Though not one of Astaire-Rogers strongest musicals, the musical is still enjoyable despite its rather bland plot.

It was fun to see western star Randolph Scott garbed in a sailor's uniform and acting like an old salt.

Not Fred and Ginger's best, but great Irving Berlin songs and dances

A cute and honest musical with some great turns by newcomers at the time Betty Grable, Harriet Hilliard, and Randolph Scott. A stale plot and only slightly entertaining music, but all the hilarity and charm that the grand old duo bring to the silver screen. Another nice classic.

In 1936, they must have thought longer was better. I tried to watch this because it is rated pretty well, but it drags.