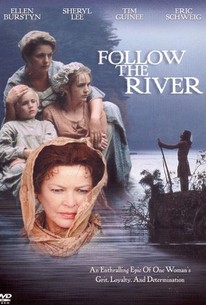 Sheryl Lee stars in this fact-based story of a colonial woman taken prisoner by a tribe of Shawnee Indians during the French and Indian War. After being abducted to the tribe's settlement in the wilds of Virginia, Mary Ingles (Lee) befriends a Dutch woman who is also being held captive, and the two manage to escape and work their way back home through the dangerous Virginia wilderness. Based upon the novel by James Alexander Thorn.

Tim Guinee
as Will Ingles

There are no critic reviews yet for Follow the River. Keep checking Rotten Tomatoes for updates!

I read some of the other reviews for "Follow the River". It seems if you have read the book, the movie is disappointing. I haven't read the book. I enjoyed the movie. What is the saying? "If fate hands you lemons, make lemonade." Mary Ingles makes the best of her situation, but in the end decides it better to leave her children with the Shawnee and try and make it back to her husband many days travel away. That would be one tough decision.