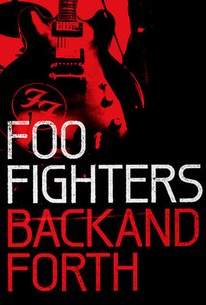 Dave Grohl had been writing and recording songs since he was a teenager in Washington D.C., but it wasn't until Nirvana collapsed after the death of Kurt Cobain that Grohl opted to step out from behind the drum set and move forward as a frontman. The Foo Fighters' self-titled debut album featured Grohl playing all the instruments, but he soon assembled a working version of the band to go out on tour, and seventeen years after their 1994 debut, the Foo Fighters have weathered personal differences, a demanding touring schedule and health issues to become one of the world's most successful hard rock bands. Foo Fighters: Back and Forth is a documentary about the band in which Grohl and his bandmates talk about the band's history, perform some of their best-known songs for a sold-out audience, and work in Grohl's makeshift home studio with producer Butch Vig to record their seventh studio album, Wasting Light. Foo Fighters: Back and Forth received its world premiere at the 2011 South by Southwest Film Festival. ~ Mark Deming, Rovi

Critic Reviews for Foo Fighters: Back and Forth

Unfortunately... Foo Fighters: Back And Forth settles into a rather mundane laundry list-like recounting of each album's creation and the band's achievements.

Audience Reviews for Foo Fighters: Back and Forth

Foo Fighters: Back and Forth is basically a "behind the music" style documentary about the Foo Fighters. It chronicles from Dave Grohls days with Nirvana all the way to the Fighter's 7th album, Wasting Light. I am a big fan of theirs, so a lot of their story I knew, but there was quite a few things I had never heard and found fascinating. The band has been through quite a bit, and remain the best current rock band going today. If your not a rock fan, or a fan of Foo Fighters then A) you have bad taste in music, and B) just watch a country music movie. But if your like me, then you should most definitely check this out.

This documentary takes you through the history of one of the greatest rock bands of our time, from the sudden death of Nirvana to the recording of the 2011 album "Wasting light". It's touching, funny, honest. And it shows two things: a) Dave Grohl, the nicest guy in rock'n roll can be an asshole too, if he has to. But he also has the greatness to show that in the film. and b) it's unbelievable how many great songs the Foo Fighters have written over the course of the last 15 years. Highly recommended.

A great documentary from one of my all-time favourite bands chronicling the entire history of the band so far. Well recommended for all fans as well as for newcomers, Dave Grohl is My Hero :)

Foo Fighters: Back and Forth Quotes