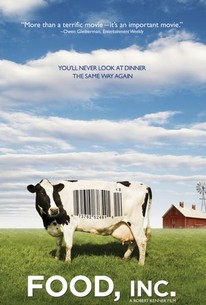 Critics Consensus: An eye-opening expose of the modern food industry, Food, Inc. is both fascinating and terrifying, and essential viewing for any health-conscious citizen.

Critics Consensus: An eye-opening expose of the modern food industry, Food, Inc. is both fascinating and terrifying, and essential viewing for any health-conscious citizen.

Critic Consensus: An eye-opening expose of the modern food industry, Food, Inc. is both fascinating and terrifying, and essential viewing for any health-conscious citizen.

In "Food, Inc.," filmmaker Robert Kenner lifts the veil on our nation's food industry, exposing the highly mechanized underbelly that's been hidden from the American consumer with the consent of our government's regulatory agencies, USDA and FDA. Our nation's food supply is now controlled by a handful of corporations that often put profit ahead of consumer health, the livelihood of the American farmer, the safety of workers and our own environment. We have bigger-breasted chickens, the perfect pork chop, insecticide-resistant soybean seeds, even tomatoes that won't go bad, but we also have new strains of e coli--the harmful bacteria that cause illness for an estimated 73,000 Americans annually. We are riddled with widespread obesity, particularly among children, and an epidemic level of diabetes among adults Featuring interviews with such experts as Eric Schlosser (Fast Food Nation), Michael Pollan (The Omnivore's Dilemma) along with forward thinking social entrepreneurs like Stonyfield Farms' Gary Hirschberg and Polyface Farms' Joe Salatin, "Food, Inc." reveals surprising--and often shocking truths--about what we eat, how it's produced, who we have become as a nation and where we are going from here.

This is the kind of muckraking we should see more often.

This solidly constructed documentary aims to do for food production what An Inconvenient Truth did for global warming.

Concerned with entertainment value as well as clarity and punch, he uses lots of colourful graphics, and moves quickly from one aspect of his subject to another.

Compelling, entertaining and illuminating documentary which makes you think twice, and then a few more times, about eating anything at all in U.S.

Overused narration treats the audience like the cattle being abused on screen; a continuous score rams the message home, just in case we missed the point...

Smart, gripping, and untainted by the influence of Michael Moore.

Food, Inc. is a comprehensive indictment of what's wrong with the modern food industry.

A compelling and eye-opening documentary made with clear-eyed passion and a deep-seated sense of justice.

The result is a very unappetizing dish, served in the form of a valuable documentary. [Full review in Spanish]

Want a nice juicy burger? Maybe not, maybe never if you catch Food, Inc., a calm but powerful indictment of the food industry.

As a film, it functions almost to snow you under with bits of little-examined, often unconnected ideas. The narrative is segmented into extremely short intervals, all helpfully introduced by inter-titles with cute plays on words.

We are what we eat, and this is an informative documentary that exposes some disturbing - yet not exactly unknown - truths about the food industry in the USA and shows how vital it is for people to start consuming natural/organic products in order to live healthy lives.

A well constructed argument that criticises the food industry for its methods and the government for its lack of oversight. Prepare for jarring images of animal cruelty. What's ignored in the whole proposal is the obvious population explosion and concurrent rise in affluence of millions, affording them the luxury of eating what they choose (and, as the film itself points out, they make the wrong choice ). And so a passionate, if incomplete, presentation. If you're reading this you probably already know where you stand on this issue. Where is the doc that takes on the consequences of feeding the population explosion is what I wanna know.

In this documentary on the american food industry, you get an inside view at where your food comes from. Seeing what Monsanto does to the farmers, what IBP is doing to the cattle, and what Tyson is doing to the chickens, you may never eat again. I know most people would just say that they can't live without their meat, and it doesn't bother them where it comes from, or what's in it. Being a vegetarian, this film opened my eyes to the prospect that even my organic produce may be full of harmful chemicals. Some of my classmates went vegetarian for life after seeing this disturbing, deeply affecting documentary. It's an important one to see. Watch it!

Important. Scary. Effective. Food, Inc. is a documentary that lives up to its hype. It has a very clear message: The food industry is bad, and then it goes on to tell and show, in full view, how and why this is so. It may be a bit disorganized (after all, it has a lot to cover, from seeds to cattle), and its also hard to tell how much of the information is exaggerated in order to scare audiences into taking action, but it is obvious that this film comes from a good place and has a noble goal. The film deserves to be watched based on that fact alone.