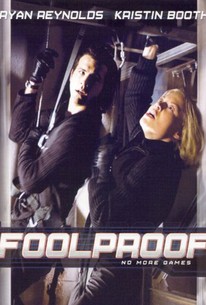 A harmless game among friends escalates into a dangerous game of wits against a master criminal in writer/director William Phillips' taut sophomore thriller. For seven years, Kevin (Ryan Reynolds), Samantha (Kristin Booth), and Rob (Joris Jarsky) have mastered the homespun game Foolproof, in which they plan -- but never actually execute -- a series of elaborate, high-tech heists. When ruthless British gangster Leo arrives in town to case an upcoming diamond heist, his suspicions of the three harmless role-players soon lead him to believe he has some competition. Stealing their plans for the heist and pulling off the crime without a hitch, Leo subsequently threatens to implicate the trio with the crime lest they pull off an exceptionally tricky heist for him. As the three friends fall prey to the seasoned criminal and police soon begin to catch their scent, Kevin, Samantha, and Rob must use all of their resources to make it out of the daring heist alive.

Someone lost their job over this one.

Foolproof has a lot going against it in that it's both Canadian and Ryan Reynolds has a lead role. Recipe for disaster, right? Not so much in this case. It has enough charm and enough interesting twists to make this worth a watch.

Actually pretty good, Ryan Reynolds is his smart ass self.